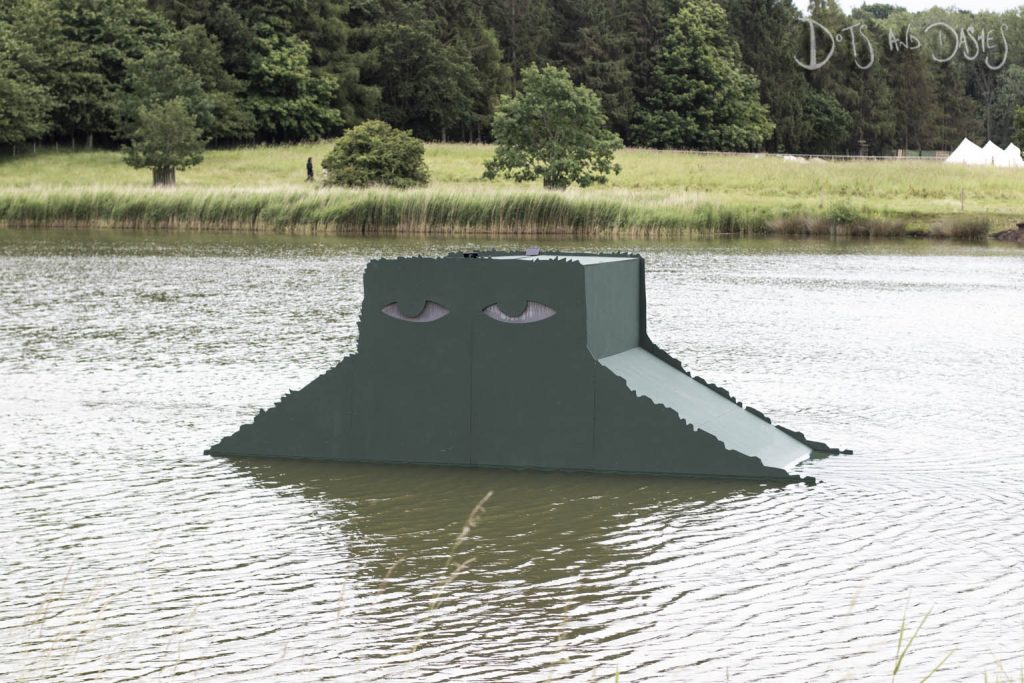 These feelings are manifestly shared by many in attendance, reflected in an atmosphere the like of which, while suddenly unfamiliar, was never forgotten. With bonhomie commonplace, there’s as much relish for talking with people we don’t know as there is those we do in places we don’t, and it must be said that this previously unexplored lakeside setting is one of the festival’s biggest selling points. Cut straight to the morning, and canoes and kayaks parade around at glacial pace, while those of stronger constitutions tuck back into thick, creamy pints of Verdant’s finest pales to a stentorian dub soundtrack. It’s not quite freedom, but it doesn’t feel so far off.

In accordance with those immortal words of one Peter Fonda, a good time is, seemingly, had by all… 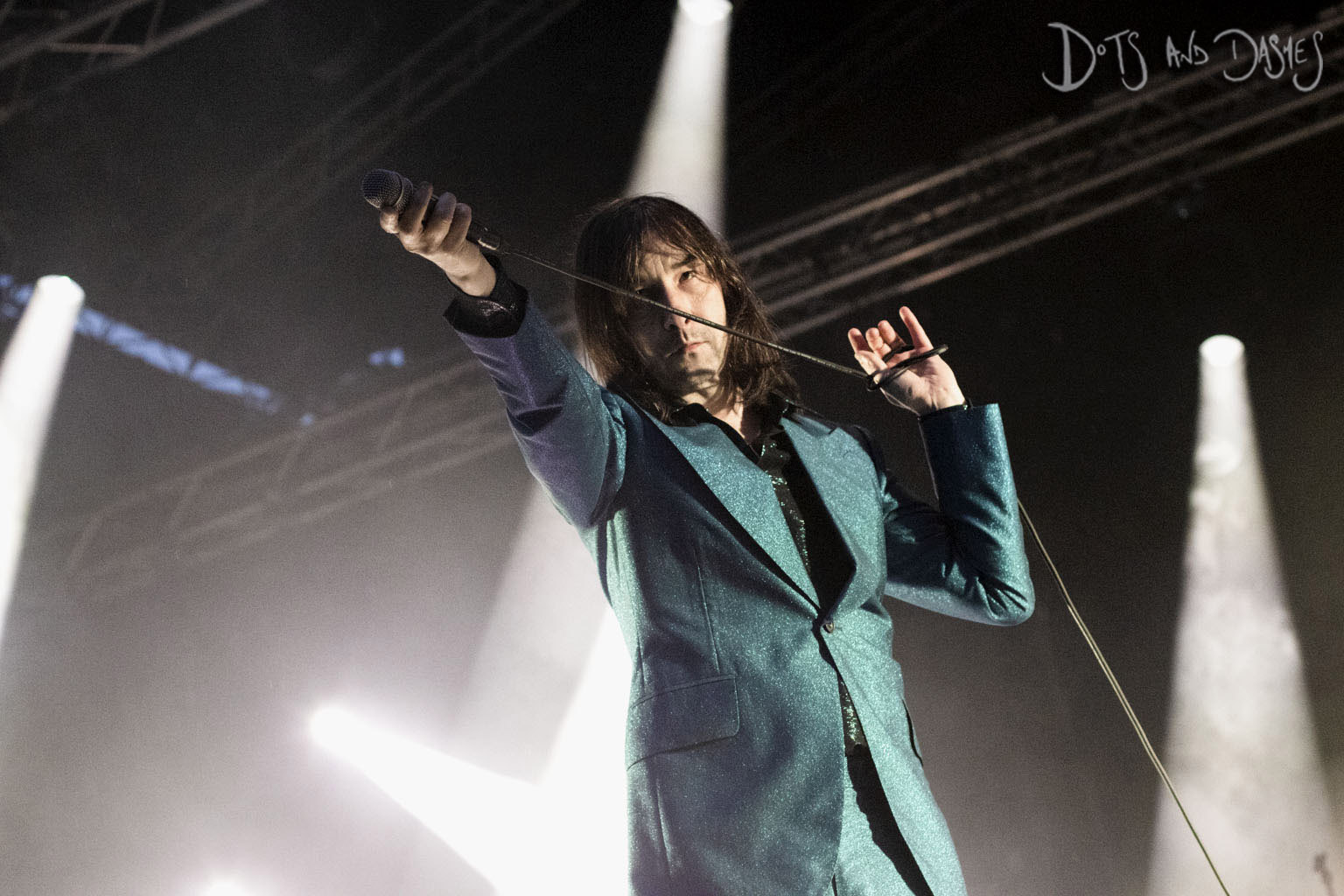 From the opening moments of Jamie Reynolds’ DJ turn on The Canopy Stage, it becomes clear that it’s not solely live music that has been missing and missed in recent months, but so too loud music – being reacquainted with sound which breaks the 100 dB barrier really makes for a strangely landmark moment, and unexpectedly so. To see crowds again and smell all-pervasive skunk make for all the more predictably reassuring indications of a vague reversion to more recognisable normalities. But it’s sort of disorientating to refamiliarise yourself with the good (the fluidity of human interaction, as newfound friends are gained while older others are lost to remote beer tents and their contents) as well as the bad (the rigidity of lower back pain, being stood vertically all day and lying horizontally on the ground all night), I suppose because festivals have become so central to so many of our social calendars.

As has EURO 2020, so no sooner have Chubby and the Gang caterwauled their way through a half-hour of blitzkrieg schlock, than they’re bellowing: “Come on, England!” at an enormous screen on the other side of the site. Fifteen minutes of A Certain Ratio, crammed into half-time, make for at least 45:1 the enjoyment of a drab ninety, but England vs. Scotland is undoubtedly the day’s main headliner for most – damp squib though it may be. So while sodden underfoot, it’s up to Daley Padley – aka Hot Since 82 – to raise spirits once more, which his set of readily digestible house (Strings of Life, and the like) seems to.

Solids are a real struggle come Saturday but liquids continue to disappear, so I flick through a few halves of DEYA’s Magazine Cover when someone walks by in a T-shirt emblazoned with the slogan: ‘Stamp Out Reality’. Away from tabloid furore, the Newly Normalised world of masked supermarkets and televised briefings feels increasingly distant, as inhibitions dissolve overnight and never really, truly return. With negative tests a prerequisite for entry, it’s a welcome development.

More so than the arrival of The New Twentys, who do downright B.A.D. Big Audio Dynamite imitation on the Main Stage; considerably better, then, are Other Half who – not to be confused with the Brooklyn craft masters who’re, alas, absent – channel the bass-forth fury and tumult of later mclusky-cum-earlier Future of the Left on the Signature Brew Stage. Intriguingly, the stages are curated in such a way that many amass their own audiences, isolated from the rest. So whereas that for Walthamstow’s best-loved watering hole leans heavily on punk and more acerbic styles besides, Verdant conversely bring the bass-favouring sounds of the West Country to proceedings, all played through absolutely booming speaker boxes. When Bristol’s ABFX drops ABBA’s Dancing Queen, it sounds thin; when the Swedes’ fourth UK Number 1 segues, unprecedentedly, into Aphex Twin’s 180db_ [130], there’s phatness to spare. It’s a peculiar concept, attempting to align two entirely incongruous catalogues with one another, and I’m not entirely convinced it quite works. But as and whenever more recherché RJD cuts drop, it’s on the money, money, money. 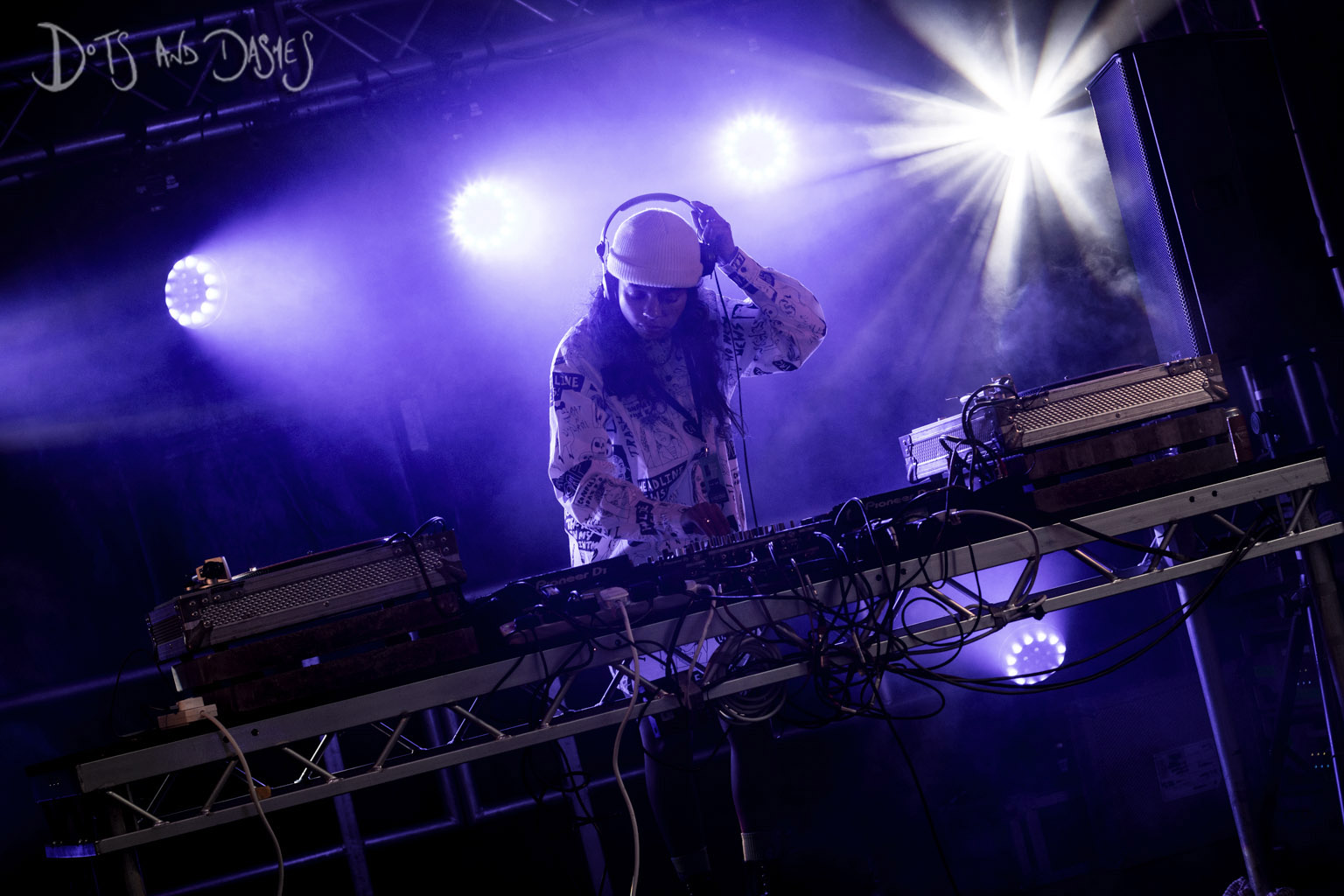 As is TSHA, whose set in the wooded area above and beyond Northern Monk’s so-called ‘Yorkshire Dale’ flits between endless sounds and styles with fleet alacrity, the London-based producer turning in the definitive electronic showing of the weekend. Deplorably, Teisha Matthews neglects to include Sister, but she can be forgiven the omission; not least as her ambidexterity on the decks seriously eclipses that of the proceeding Erol Alkan on this occasion. And then we have some headliners not of a footballing variety, if still of Anglo-Scottish flavour in Primal Scream. Bobby Gillespie & Co. are met with a well-lubricated fervour, and the band respond with a suitably loose suite – whether that should be due to a lengthy spell on the proverbial sidelines, or otherwise – which spans their expansive discography. Much of Primal Scream’s live show hinges on Gillespie’s performance: if he’s on song (and this isn’t always to be taken entirely literally), then it works; if not, markedly less so. Tonight, in a spangly teal two-piece, he probably looks more than sounds the part, cajoling the rabble at every possible opportunity. At times, inevitably, the songs themselves do the heavy lifting – Come Together (the Weatherall mix, with moments of Farley’s interpolated), the aforereferenced Loaded, and Movin’ On Up among the foremost. Aside from Screamadelica, Country Girl continues to fly the flag enthusiastically for the otherwise underwhelming Riot City Blues, but the set does seem tired at times. It’s now been a bit over five years since Chaosmosis, which few would disagree falls a fair way away from their finest work. A more compelling case could definitely be made, therefore, for suggesting Primal Scream are fast becoming the kind of ‘heritage act’ that’s only too content to rest on figurative laurels where they once wouldn’t so much push the envelope, as rip it up and start again with their every release.

The notion of revisiting previous records is nothing new, of course. Indeed, even Primal Scream have done so – whether that be via deluxe reissues or live retrospectives – but the London African Gospel Choir’s glorious rephrasing of Graceland is certainly novel, if not totally loyal to Paul Simon’s intended tracklist. As such, we’re sent on our way by its greater hits (Diamonds on the Soles of Her Shoes, Graceland, and You Can Call Me Al), as well as a lessened sense of headache, first brought on by Northern Monk x Emperor Brewery’s collaborative stout, Saint Croissants. (Spoiler: pretty lethal, and leaked in a pocket quite likely to reek of banana puree indefinitely.) 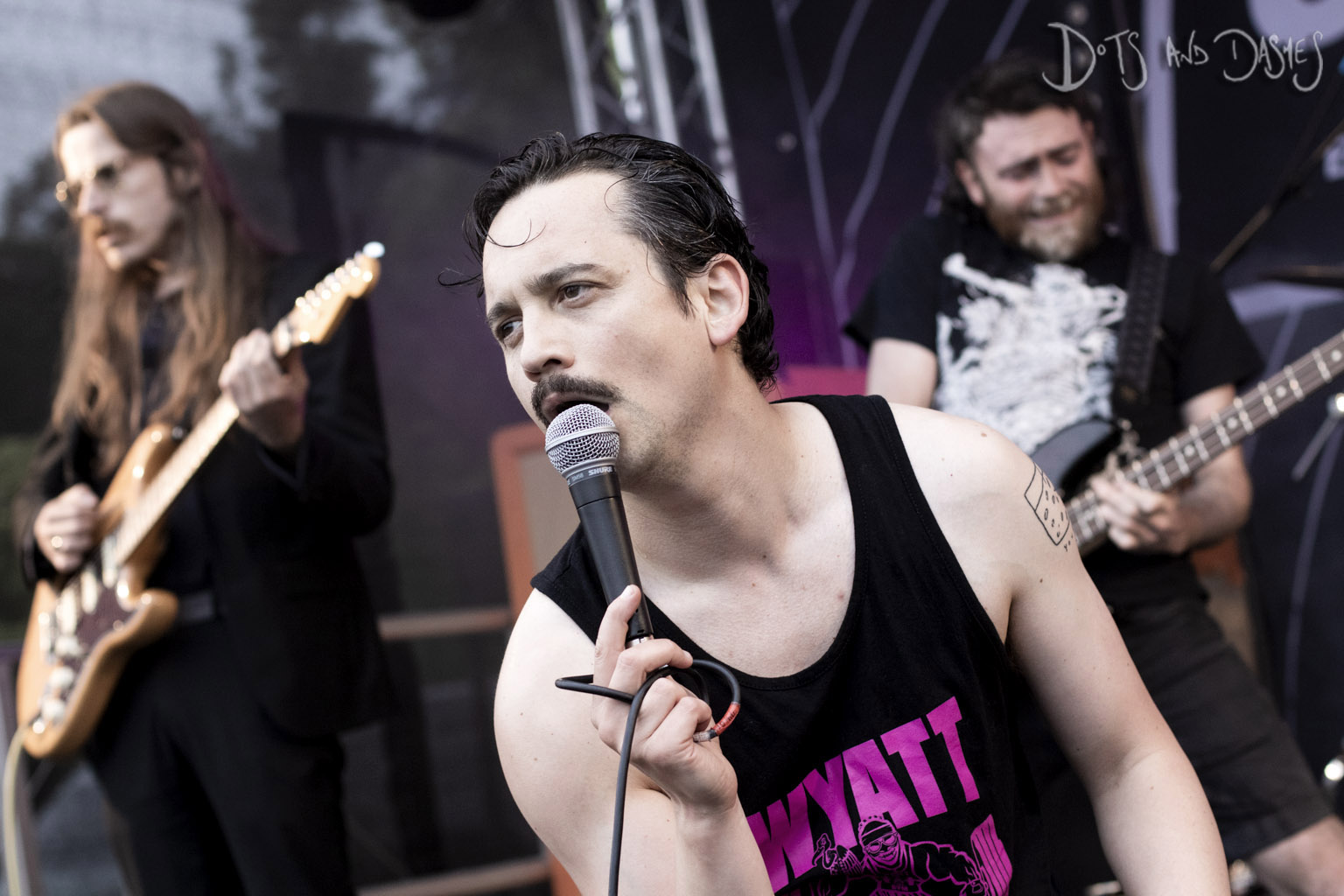 On the subject of beers, and most seemed to subject themselves to a good few, there’s something extremely satisfying in drinking those brewed in cahoots with bands, while watching said band live. JOHN didn’t join in on anything of this sort, but if they had, it probably would’ve been among the best onsite. (Which are, I ought to add, incredibly competitively priced for the most part.) Instead, their set is a taut, intense showcase which is seemingly over before it’s really begun. And with the festival then rattling toward its conclusion, attentions turn to Pigs Pigs Pigs Pigs Pigs Pigs Pigs; but not before a trip to the neighbouring Signature Brew bar for a pint of Beer Beer Beer Beer Beer Beer Beer – an absurdly drinkable collaborative New England pale ale. It lasts a minute or two longer than Matt Baty’s jet-black vest stays on his back, freeing him up for all manner of onstage aerobics, as the Newcastle quintet crack on through the suitably named Reducer with wanton abandon. Live, they’re a real prospect, and it’s a pleasure to see them finally release Viscerals – put out in April of last year – into the wild delirium of the mob before them.

The Signature Brew mantra – that ‘great gigs deserve great beer’ – may be inescapable over the course of the weekend, decorating everything from bars to buses to totes to T-shirts, but it becomes increasingly difficult to refute. And while we’ve become accustomed to accepting godawful beer, regardless of how ‘great’ the gig, it’s spiriting to see Bigfoot not only attempt, but so too succeed in rectifying this abiding foible of the festival season. The championing of quality over quantity, and micros over macros, should be something that others look to follow henceforth for all manner of reasons. And while there may be some misses among the hits – One Pure Thought, a rice lager with Sicilian lemon, goes down rather less well than Hot Chip’s ‘Megamix’ – this is one collaboration which has been far too long in the offing. 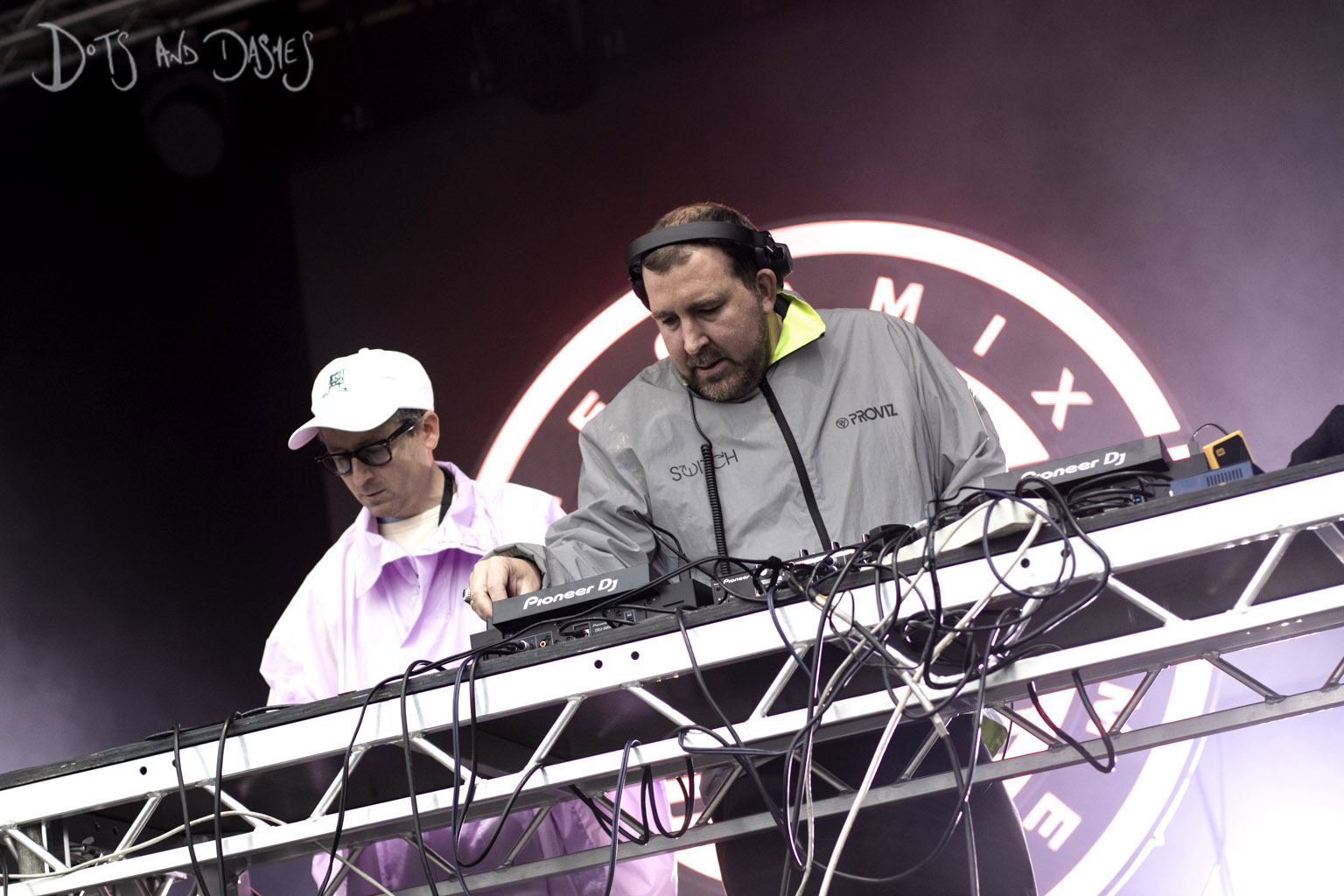 With more and more festivals cancelling this summer, and fewer still risking starting up in so tempestuous a climate, it may be that the wait for ‘great beer’ at commensurately brilliant festivals goes on. The feeling that Bigfoot could be a first and last for the season did seem to gain some momentum over the weekend, perhaps explaining why a healthy number went for broke on the Sunday night, only to reawaken come Monday in pools of cold sweat and existential self-loathing. (Or maybe that was just me.) But the weekend, overall, served as an extremely timely reminder of everything that we’ve been starved of – live entertainment; social interaction; spontaneity and serendipity – at a time when it seemed highly unlikely larger-scale events such as this would ever get the go-ahead. So kudos is undoubtedly due Bigfoot – a festival which not only stands out, but stands up to many another much better established – and I for one sincerely hope to venture down to B49 in search of this one once again next summer.