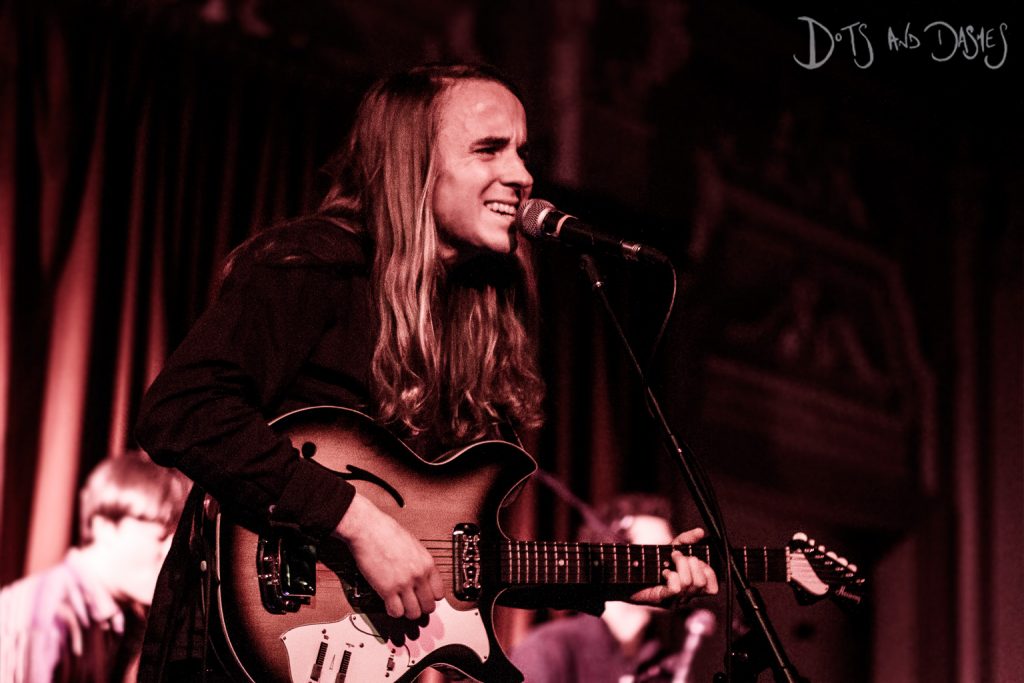 As a trenchant raconteur, Andy Shauf is something of a dying breed; as a so-called ‘album artist’, he’s made to seem even more so. Last week saw the release of his third full-length effort, The Party, and all the more intriguingly, as was with both The Bearer of Bad News and the preceding début, Darker Days, before it, it’s very much a tale – or a collection of tales, rather – of two halves. Even more of a throwback therefore, it’s as though Shauf is constructing these quietly complex recordings specifically for vinyl records. He does a roaring trade in these after a typically spellbinding performance at Bush Hall, although the discrepancies in quality between sides (or, in the case of his latest, ‘Faces’) A and B cannot be underestimated, nor overstated.

Take the two ‘Face[s]’ of The Party, for instance: its first begins with the inexorably hexing The Magician, and ends with the Beach Boyish Begin Again; two tracks to substantiate the (enviably bang-on-the-proverbial) ‘indie Burt Bacharach’ epithet. It’s on the flipside, however, where magic moments are aplenty; where tears are all the more likely to fall from the eyes of anyone with a heart, as blue lyrics concerning cigarettes and regret fall upon comparably blue, largely acoustic guitars. Tonight, The Worst in You – the first of ‘Face B’ – hears its loveably, but terribly relatably neurotic lyrical content terrifically well matched with wilting guitars reminiscent of Teenage Fanclub, while epic closer Martha Sways marries a redemptive tale to lurching fingerpicking that’s at once at odds with the smooth, swirling dance of which Andy sings. Rarely, if ever previously, have merriment and melancholy been so closely interwoven, as the room falls silent, but for the intrusive hum of an AC unit mumbling into life. Between the two, Alexander All Alone – a dead ringer, in its opening moments, for the tragically absent You’re Out Wasting – takes on an altogether darker timbre, the insistent trill of a Wurlitzer lending a bewitching, Where Is My Mind?-like atmosphere to proceedings. That same instrument is put to commensurately superb use on Early to the Party, wallflowery wordery offset by Mulatu Astatke-esque tones.

But how does this tie in with this particular review, of a live show rather than a record, then? Well, because much like Shauf’s recorded outpour, the songs we’re treated to tonight can be quite cogently put into two distinct, if not intrinsically different categories, in two distinct, if not intrinsically different ways: firstly, as Shauf himself puts it as he emerges for a much clamoured-for encore, there are “happy-sounding one[s and] sad one[s]” (note his suggesting “happy-sounding”, as opposed to simply “happy”), and secondly, there is then the thematic disparity between his storied storytales and those more lyrically ambiguous, and presumably personal, numbers. From the former category, the “happ[ier]-sounding” Jerry Was a Clerk, delivered in sinister deadpan, and the bitter, somewhat twisted The Magician; from the latter, the faintly defeatist Twist Your Ankle and the itchy, jittery Eyes of Them All, Shauf accenting its giddying chorus with totally uncharacteristic finger-clicks.

I say uncharacteristic because, for all of the accolades that have come his way in recent times, Shauf remains a remarkably meek, kindly kind. “Wednesday? What is it actually, Wednesday?” he remarks, in what could quite easily be misconstrued as tired, tired artist patter, but when genius and ingenuousness go so merrily hand in hand, even Wendell Walker couldn’t not muster a smile. He’ll later smirk himself, a bout of sporadic rapture met with an incredulous, “OK, here’s another new song” in Begin Again, but his unassuming manner readily crosses over into mastery, and the same goes for his three-piece backing entourage, too.

Pawnbroker keyboards, bass and drums fill out the spaces once vacated by lavish strings and subdued woodwind instrumentation, although these lend that little bit less gravitas than their orchestral alternatives; and said gravitas is, alas, wholly necessary when it comes to certain numbers. The Magician, for instance, sounds lamentably flimsy sans clarinets, violins and the like; likewise, the otherwise woozy intro to Early to the Party lacks allure. An interludial Q&A reveals this isn’t simply a personal qualm, either: “Where’s the horn section?” comes a thick-and-fast first question. The answer? The somewhat noncommittal, “Stick around!” It never materialises, much to our minor disappointment, although that aforementioned – not to mention unanticipated – encore does so much to dispel this…

From the “happy-sounding” canon, Lick Your Wounds which, while lacking that clarinet refrain, provides one of, if not the standout performance of the night; from the other, thus democratically making it one apiece, the heartbreakingly heartbroken My Dear Helen. But as pertinent to tonight as the songs themselves is Shauf’s permanently peeled-eyed approach, his peepers scanning anyone and everyone in sight as though scouring the room for prospective protagonists; for the next Sherry, or Martha, or Alexander, or Jerry, or Mary-Anne, or Wendell Walker, or Helen, or any other one of his many carefully fashioned characters, for that matter. “You guys are hard to read!” he quips, confirming this, although with a few in the front row either chatting or Snapchatting throughout, there are probably a few someone with Shauf’s transpositional ability could successfully characterise. As for his own, well, he’s deferential – and indeed deadpan – ’til the end, “This has been really enjoyable” his parting remark. And, understated though this goodbye may be, it’s certainly no understatement whatsoever to suggest Andy Shauf is very much one of the finest songwriters – or storytellers, for that matter – around at the minute.