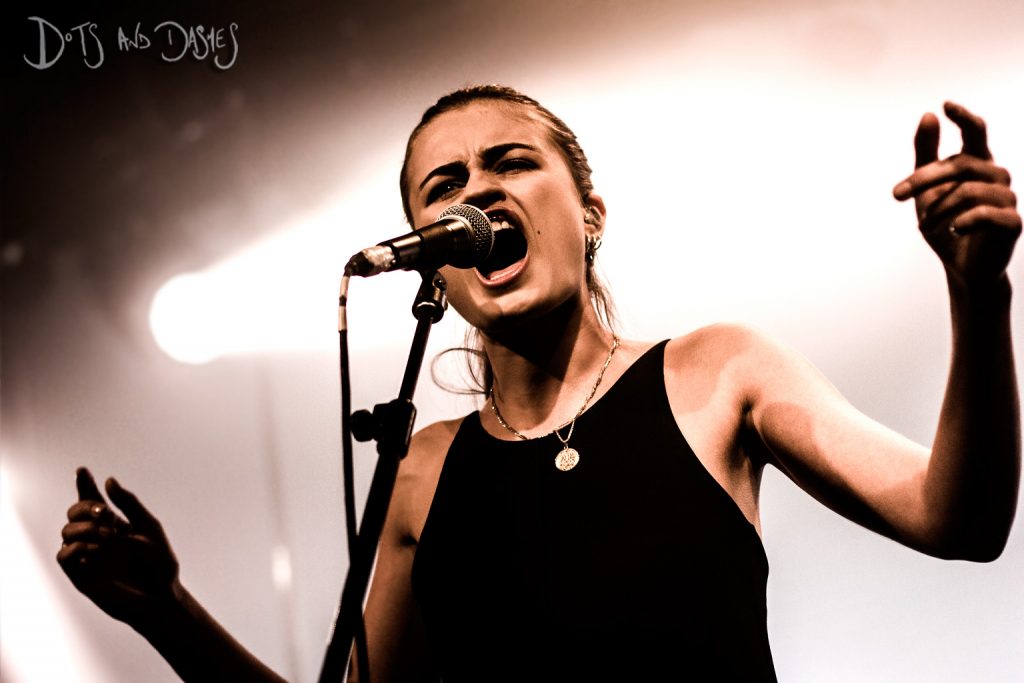 There is something of a deep-seated irony to tonight, at the salubrious Institute of Contemporary Arts, being Arthur Beatrice’s most central London show, because to this day, the forever-suave four-piece have gotten nowhere near as integral to the city’s musical landscape as they certainly should be, and should have been for years already. Again, there is no shortage of irony in the stairs beside the ICA being bestrewn with (admittedly Germanic busloads of) youth, given that the band operate up around the apices of poppy perfection, but have yet to cross over into a mainstream consciousness most commonly associated with a more adolescent demographic…

Expendable paradoxes notwithstanding though, it’s absolutely fabulous to have Arthur Beatrice back amongst it; Working Out was, and rather irrefutably remains, a masterpiece, while more recent glimpses of their sophomore record – Keeping the Peace, which is to be released on May 20th – have proven commensurately scintillating, to be totally honest. However, with honesty the most appropriate policy, tonight, something’s missing…

It’s neither the inescapably spectral absence at a grieving, bereaved family’s funereal, first post-funeral get-together, nor the inexplicable, but palpably apparent ‘something’ that’s impossible to put a finger thereon, but rather the truancy of bassist-cum-onetime vocalist Orlando Leopard. He’s here alright, presiding over proceedings from the rear of the room; his the stance of a puff-chested parent (of which there are, as it’ll later transpire, several here congregated; inclusive of Girardot’s ostensibly “[un]reli[able]” father, as is suggested during Singles), but he leaves a creative void; a chasmic, gaping cavity stage-left. Filled instead with strings and stand-ins, the band’s ambition remains both audibly and visibly boundless, but the prevailing impression is that, without the pacific, proficient influence of Leopard, Arthur Beatrice are an outfit playing within their power, rather than to their full potential.

Leopard’s rationale is, well, wholly rational – he feels his own, respective powers are better suited to the insides of a studio, rather than wasted in the back of a van meandering from venue to venue – as he’ll later make his preference for piecing together records, rather than performing live, again, palpably apparent. And those aforementioned proficiencies have ensured he’s now dining at pop’s perpetually elitist top table, producing for what is, seemingly, a more creditable than credible galaxy of stars. But his teeth were cut with Arthur Beatrice, and this band – and this is said without even so much as a smidgen of hyperbole – continue to seem eminently capable of producing the very best British pop compendium since Please, or From Langley Park to Memphis, or Reading, Writing & Arithmetic, and so on.

This said and done, the show must go on; and so, with only two weeks’ worth of rehearsals under their proverbial belts, Ella Girardot and brothers Elliot and Hamish Barnes put on a performance that, by anybody else’s standards, would doubtless astound; capable both of taking your breath away, and breaking the mould. But irrespective of context, and tonight feels quite special in many respects, this isn’t their finest hour by any stretch of the imagination; and this is due, purely yet simply, to the abyss left stage-left. “How can we feel as we used to?” Leopard once sang in tandem with Girardot on More Scrapes, and while they’re still scratching at greatness tonight, more from Working Out certainly wouldn’t have gone amiss.

At this juncture, the role which Leopard once played surely ought to be elaborated thereon, because he was never really eminently comfortable, lusting after the limelight; indeed (and this is something that he’ll later corroborate) his slinking into the shadows has afforded Girardot the opportunity to flourish, which she grasps with complete poise, and aplomb likewise. But how would they feel as they used to without so central, relevant a figure with, or for that matter, within them? We still get Midland, dramatic and demonstrative of Girardot’s burgeoning confidence, with Hamish assuming the outgone Leopard’s chiming, choral harmonies, although the lingering, malignant theory is that they’ve still to, well, work out – or perhaps rather, rework – Working Out. For reasons self-explanatory, we may never get to revel – live, at least – in the likes of Charity, Councillor, Fairlawn and Grand Union again, although Carter, Late, Singles et cetera are surely all shoe-ins henceforth?

Midland is thus the one and only number lifted from their incontestably spellbinding début, but that’s not to say that it necessarily stands out any more than, say, the big, unabashedly bombastic Worry, or their sweeping, precise comeback track, Who Returned. There is, on this sort of evidence, every reason to believe Arthur Beatrice may be about to equal, if probably not better Working Out, but there are, concurrently, reasons to be fearful of tectonic shifts in dynamic and music alike: the brassy, Bondian Healing, for one, features Girardot, and Girardot alone. Visibly, it gives even she goosebumps, but there is this stasis on behalf of the brothers that takes away from the song’s indwelling grandeur; similarly, Real Life may be big, but it’s proof enough that bigger doesn’t necessarily equate to better. (Indeed, with the shoeless Girardot enrobed in flowing white, comparisons with one Florence Welch become that bit more prominent and pronounced still…)

Elsewhere, All I Ask errs slightly too much on contemporary R&B tropery, leaning on palm-muted guitars and minimal drum fills, while staccato, trilling strings complete the piece. It’s bolstered by the kind of crescendo that’s simply made for Wilderness Festival – take from that whatever you will – before a further blast of brass lends a little of the Lloyd Webber by way of La Habana. With its tense intensity and terse, punctuational agilities, Brother hears the ensemble revert to the ways of the début, but takes in “the eight years” of experience they’ve amassed together to produce something that, essentially, exudes smoothness.

Smothered in the overwrought, I Left You later goes out to those who’ve supported the four-piece for the duration, and feels slightly forced for it, while the concluding Every Cell sees Girardot reduced to little other than another hireable, nameless house vocalist, bewailing laments above the brothers’ cowbells and rim-shots. And, as anyone who’s followed Arthur Beatrice for even a moment knows, she (and with that, they) are considerably better than that…

It’s this to which the misnomered, spine-tingling I Don’t Get That Chill attests, as hairs stand to attention with the rigid, dutiful accordance demonstrated by the Household Cavalry of the opposing Horse Guards Parade daily. It’s not merely Girardot’s changing not of the guard, but of attire – from black to white – which differentiates this incontrovertibly brilliant number, as capos and tambourines combine to glorious effect; as glorious an effect, in fact, as PJ Harvey and John Parish on A Woman a Man Walked By, which it just so happens to recall quite accurately.

It is, aside from the undeniably nuanced, almost dramaturgical Who Returned, far and away the strongest, and there is real strength to it; the same can be said for so much of this evening, as Arthur Beatrice once again go to show how bold a band they’ve become over those “eight years” aforesaid. However, were they ever looking to regain greater thew, well, I really needn’t say any more Orlando, need I?