Not only are Battles one of the most aspirational of acts when it comes to continually defying convention, and the intrinsic limitations thereof (tonight, the merch stand proffers aficionados the opportunity to purchase a confounding ‘Grey [print] on Grey’ T-shirt), but they’re also one of the most inspirational, musically, also. And on the evidence of this evening, they’re pretty approachable chaps, too; the ineffably affable Dave Konopka fielding all kinds of questions about finer pedalboard intricacies and stompbox trickery as he and Ian Williams diligently arrange a petrifyingly complex assemblage of weird and wonderful machinery, errant wires, and whatnot.

Whilst delay pedals don’t feature overtly prevalently within the auricular structures the band strive to contrive, the show is preceded by what has seemingly become a prerequisite wait; one that, in spite of Konopka’s forthcoming, keen handshakes, explanations and so on, perhaps unsurprisingly does little to dampen the palpable impatience spreading throughout The Dome. Lest we forget, this ‘exclusive intimate show’ – as tonight’s tickets quite acutely call it – is their first in the capital for quite some time now. Indeed, as Williams will later orate, “It takes a long time to go on tour, and to make a new record; and we were a little slow.” Nonetheless, so scrupulously precise has their every endeavour proven thus far, that Battles should be commended; not condemned for their nigh-on-unrivalled attention to detail. And, on the topic of pertinent details, they’re preparing a new one right now…

For the time being mind, as the minutes continue to elapse – decelerating as they do so – Konopka and Williams increasingly look as though they’re playing one another at Lexulous, their brows becoming increasingly furrowed as the game intensifies, the tension – and with that, the heat – rising exponentially. Nevertheless, Battles attract the kinds of cognoscenti that cheer when a weary tour manager’s torch starts to flicker and subsequently flicks itself on, rather than when the lights go off; and gripes turn to glee mere seconds into the first of three previously unreleased numbers to infiltrate tonight’s setlist. A playful, fucking teasing opener to recall mangled techno blaring from the knackered music box of a Mister Softee truck, Konopka and Williams create more perceptible magic in a matter of moments than Blur managed in fifty-odd minutes last month.

However, whatever you might’ve gleaned from this review thus far, there have been no further changes in personnel since Battles were last seen onstage in London; and having been sat totally static at the back, the imposing yet again, personable John Stanier now sits down at his kit. Central to the sound and sat stage-centre, the ferocious wizardry that he then thumps into his wizened array of iconic cymbals and snares is nothing short of remorseless. If there is thus a readily discernible pleasure that’s painted across Konopka’s face, then that of Stanier is coloured with pained endeavour. But in comparing and contrasting – albeit momentarily, if not facilely – his craft becomes all the more impressive; not least as his is a finesse that relies not on technological refinement, but rather on the human metronome that you can only assume ticks on within the man regardless of whatever it is that he may find himself doing on a typical, quotidian basis. 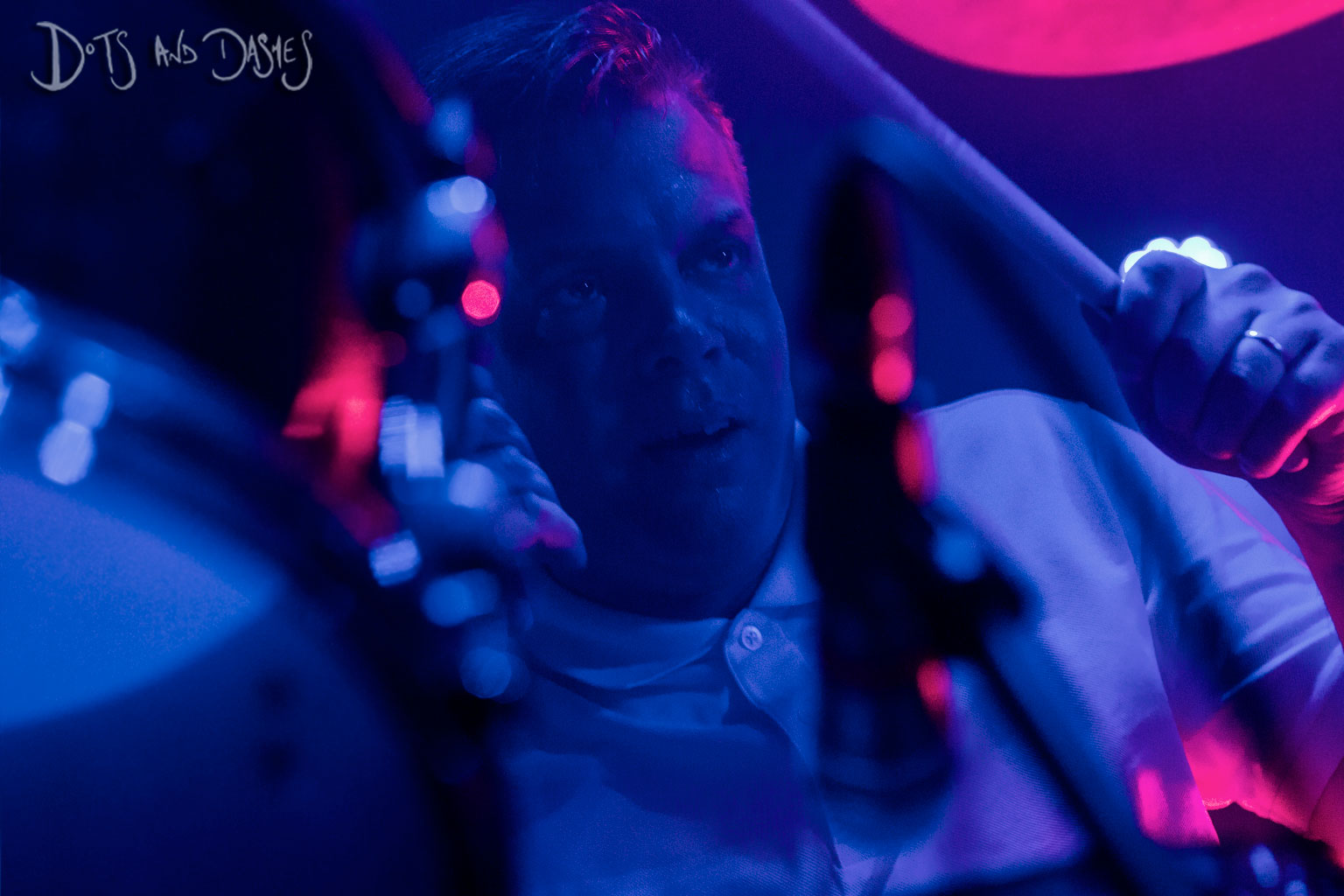 They then serve up Ice Cream – a dish best served with all the stupefying force of a brain freeze – that has, since last seen or heard from, been better deconstructed than Jay Rayner’s appraisal of a Fat Duck menu. False starts, there are then a few – a few too many not to mention, in fact – as a typically fragmented Wall Street takes some time to find its feet. Once it does so, however, it proves truly electrifying all over again; its pronounced hip hop lilt fearlessly taking it toward territories where the likes of Timbaland now tread. A thorough run through Africastle then follows, new wind in its sails and newfound swagger in its sandals; and so, as was with Ice Cream before it, it becomes quite difficult to tell where Gloss Drop ends and Dross Glop begins, the band seemingly remixing themselves as they go along.

As such, their aptly locomotive train of thought can be derailed by overdone attention to detail: there are all-new, unwelcome annals to an infinitely looped Atlas tonight, as it too suffers for a few moments’ tinkering, tailoring and technological recalcitrance. But such is its tribal brutality that soon enough, sure enough, Battles are right back in the groove of what must be seriously considered one of, if not the defining work of contemporary art-rock; the indisputable blueprint for so much unrepentantly progressive music since. Stanier’s kick drum now functions as a sort of makeshift air-conditioning unit for those so inelegantly splattered against the front of the stage, as skirmishes kick off a few rows further away. “Is it wrong to say we have T-shirts for sale?” Williams rather sardonically moots, but by the time its tumultuous denouement comes around, the skirmishers are largely shirtless, thus ensuring a scanty £20 expenditure on a ‘Grey on Grey’ bit of branded apparel begins to look like an improbably sage bit of business…

But such are Battles’ exertions, that you start to feel for them in a sense; so focussed are they on creating, rather than indolently recreating their recordings, that aside from Stanier (who looks completely lost in his complex polyrhythms for the most part), most of the fun here for the taking seems to be taking place offstage. For were the world as perfect as this particular show, these pseudo-dance ditties would not only displace those alarmingly macabre ice cream van jingles nationwide, but discothèques up and down the country would be sweating it out ’til the earlier hours to such humid magnificence as Futura. Yet for all of its imperfections, inclusive of those aforesaid in reference to this evening, Battles make the world an incontrovertibly better place; and with that more recent material showcased tonight sounding like a quite logical continuation of Gloss Drop in particular, a wider world may be about to come to recognise, and in turn revere the band for more than merely Atlas and Stanier’s sky-scraping cymbal.