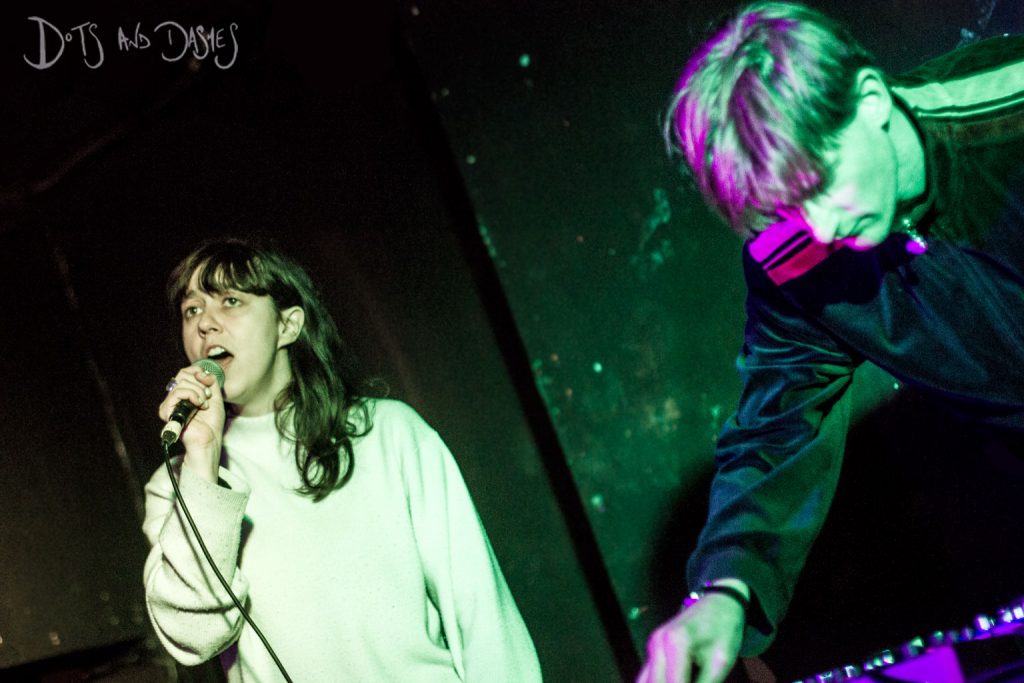 “Throwin’ down on a Sunday,” as Raphaelle Standell puts it tonight, may not be the most conventional way to see out the week, but when Blue Hawaii roll into town – as the montréalais pairing have been known to do with disappointing infrequency – exceptions simply must be made. And from a thumping Free at Last, right through to an impromptu take on the comparably pared-down Lilac, lifted from 2010 EP Blooming Summer, she and Alex Kerby turn in an exemplary performance meriting far more than tonight’s moderate South Coast turnout.

Standell – lamenting the cold, and layered “heavy under blankets” – joshes throughout, “slowly but surely [delayering like in] a good game of strip poker,” with the mood jocular and the atmosphere joyous; rarely more so than during the wonderfully heartwarming Versus Game. Admittedly, it’s thrown away rather early on, but its Whigfield-by-way-of-Club 18-30 ebullience is so brilliantly offset by Standell’s incongruously searching lyrics (concerning attachment, detachment and the promise of reattachment, as is with so much of last month’s Tenderness full-length), that beneath the fun Euro-NRG superfice lies a profound, fundamentally human charm.

With the release seeking to speak of ‘the need for more tenderness between each other in virtual and real life’, Standell’s heartstring-tugging vocals and occasional, finger-picked acoustic guitar combining with Kerby’s conflation of ’90s dance tracks and ‘deep disco cuts,’ this sort of juxtaposition is both continual and seemingly concerted; and it’s one which translates fluently to the kind of live environment in which the likes of Belong to Myself were always likely to really thrive.

More unlikely, less predictable highlights are many however, with the duo readily and dramatically reworking the record’s more intimate moments: Younger Heart, once an introspective song of eventual ‘detachment’, becomes an altogether more inclusive thumper, its pulse heightened with perfect equipoise; on Searching for You, hints of Shanks & Bigfoot abate somewhat to give rise to a garage redux that’s altogether grittier and, for that, greater than its recorded counterpart. Much like those human emotions that Standell is so demonstrably able to relay in song form, Blue Hawaii’s songs themselves – whether they be new, old, or older still – seem to be in a state of constant flux therefore, with the more harsh, serrated techno edges of In Two instantly sounding incisive enough to slay any one of Sónar’s many enormodomes.

At times, mind, familiarity proves completely paramount, with the eternally breathtaking vocal loops of Try To Be triumphant, as Standell questions certain personal (and, to a lesser extent, professional) incertitudes atop a guitar redolent of Thom Yorke’s Reckoner. Herein lies one minor reservation, however: that so overtly (when not overly) electronic are the musical accompaniments to Standell’s instinctively intimate musings, that at times, the warmth provided by live acoustic resonances may not have gone amiss.

Similarly, for all of the “dirty bass” which rakishly besmirches the latter parts of No One Like You, with Owen Pallett’s ecstatic strings and the elastane bass lines relegated to lowly channels on a knackered mixer, the outcome is less impactive and more evocative of a live PA. It’s to be expected to an extent of course, and this is therefore meant as more a remark than a reproval; it’s simply more transparent at certain points than others.

But for all of Standell’s frequent commenting on heat (the warmth that lingers within the nearby Duke of York’s Picturehouse, or the “perfectly balanced” spice at Cummin Up across Preston Road) or a lack thereof (the upstairs venue at The Joker is, and this comes from someone with mercifully serviceable circulation, bracing to say the least), Blue Hawaii blow only hot and never cold. And so, as those in attendance trudge out into the night, it’s practically impossible to discern whether the chills sensed are due to the biting winds of Brighton, or the right bright radiance of the preceding hour or so.