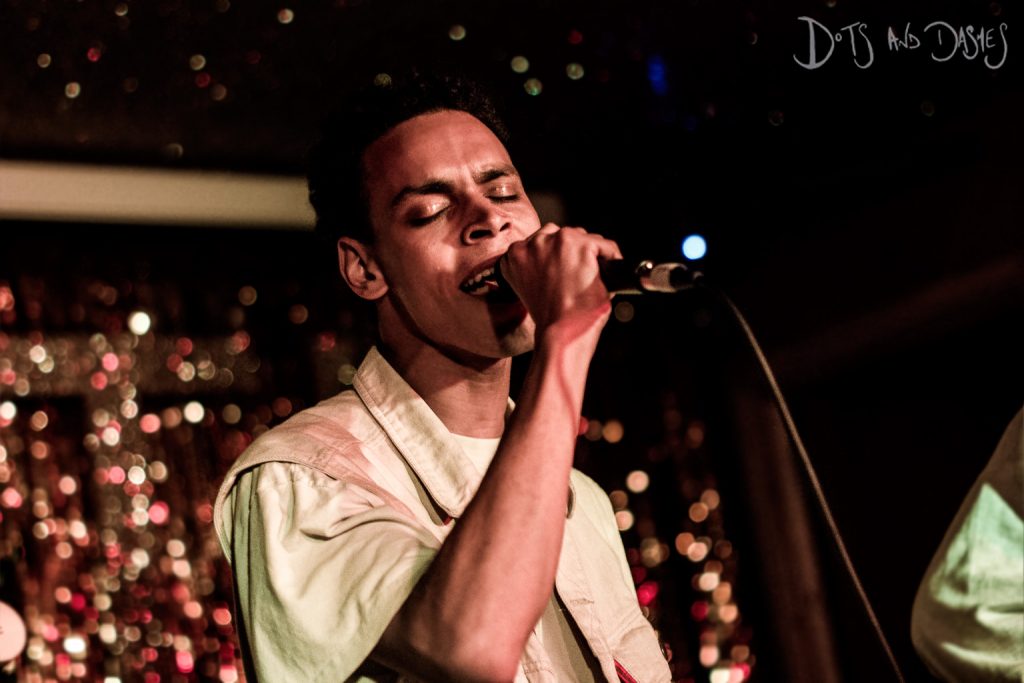 When I last saw LISS in London, the Aarhus four-piece were gathered together in the considerably more refined confines of XL Recordings’ Ladbroke Grove enclave; Hackney, by contrast, is that bit more rough – if rather less so than it once was – but also ready for what is only the ascendant Danes’ second date in the capital. Of course, the E9 postcode far better befits the “UB40 for hipsters” billing overheard in the Moth Club bogs, such is the omnipresent prevalence of knowingly worn sportswear – a predilection in which LISS themselves share – and so on, and so for them to play this beglittered grotto makes complete sense.

The hour they’re down for on the door, however, makes slightly less, as LISS only released their début EP, First, the Friday before last. Consequently, they materialise strategically late, with this the first glimpse we get of Holm who, in bleached denim gilet, looks every bit the boho Ali Campbell previously alluded to. In terms of patter, it’s something that he’s still not too hot on, “It’s really hot” more or less all we get from him. He’s not wrong, the room worked up into a sweltering mess by the opening moments of Good Enough alone, but the fact that he never breaks sweat nor stride is testament to a growing conviction in his ability, and vocally, he’s flawless; absolutely flawless.

Lyrically, the likes of Miles Apart and Sorry – both lifted from First – skilfully concern the coming-to-terms with distressing, if decidedly necessary separation, but they’re belied somewhat by a sound that is unbelievably tightly bound for a band who’ve only been together since the start of last year. And with an AKAI MPC taking care of the songs’ more eccentric quirks, nooks and crannies, the qualities intrinsic to, say, Always are left to shine through thoroughly lucidly.

Perhaps expectedly, it’s the supremely fluid, lithe Try which attracts the most rapturous of receptions, although their commitment to continual development, or aural evolution, was made evident when we met, as while I conversed with Holm and guitarist Vilhelm Strange, bassist Villads Tyrrestrup and drummer Tobias Hansen could be overheard discussing newly recorded material in hushed tones outside. Tonight, we’re let in on some of those newer songs they’ve been working on, with the airless, breathtaking Know You Do proving redolent – perhaps aptly – of Kool & The Gang’s Too Hot, while the proggy, syncopated Bite the Bullet is slightly less readily digestible, if all the better for it. For reminiscent, momentarily, of Roxy Music, a subsequent, almost Beastie Boyish chorus later gives way to what is less a middle, and more an integrally lengthy eight. Ending on the offbeat, brilliantly elucidating that aforesaid musical exactitude, this particular composition – a particularly compelling one, at that – is as idiosyncratic structurally as their sound is in and of itself.

But with the promise of an incoming new record comes, from it, Precious; a track that packs ample promise itself, as Strange’s fluttering guitar – at once evocative of compatriots Blaue Blume – combines beautifully with Holm’s wholly reasonable declaration, “What we got is special.” Because, aside from the cod reggae-grooving Without Me, with its Trashbatty samples, etc., what LISS have is unspeakably so…