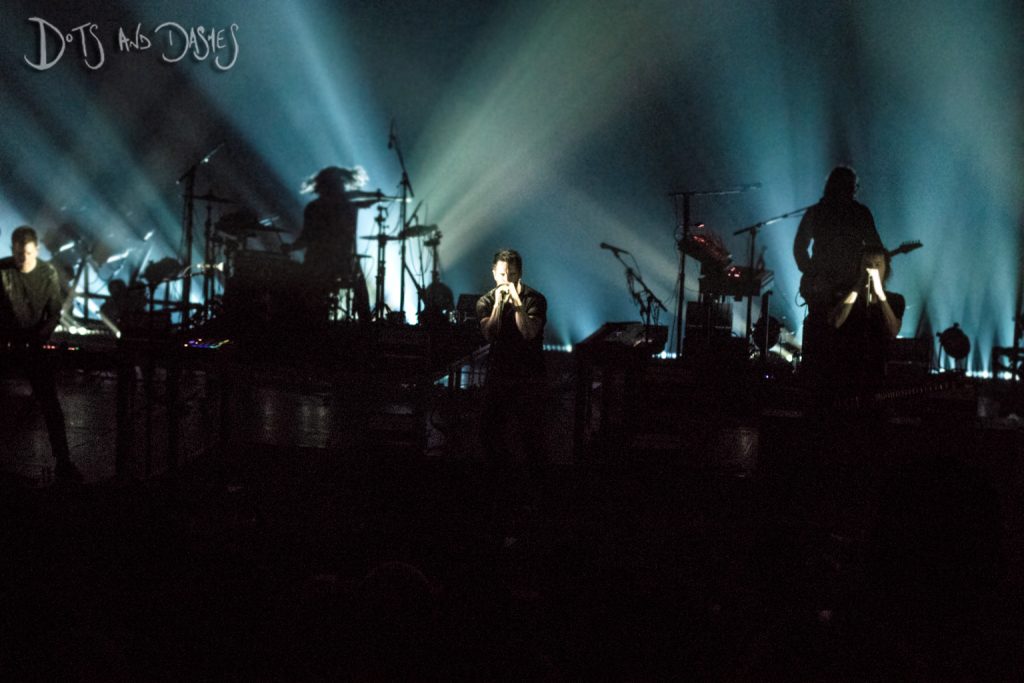 Of course, it’s totally and utterly counterintuitive to ensconce oneself within the Southbank Centre to see Nine Inch Nails, supported by Black Moth Super Rainbow (who prove more insipid than inspired for the most part), as part of the iconically coiffured Robert Smith’s Meltdown when, by London’s drab standards, it’s decidedly scorching outside. The mere notion of it goes against every grain of good, decent sense, but such is the gravitational allure of Trent Reznor – given added gravity by dint of Bad Witch, a first NIN full-length in no fewer than five years, having been released this very morning – that concessions can’t not be made. Thus, that most absorbent of black donned, with many a T-shirt emblazoned with a certain three-letter acronym, we sink into the Royal Festival Hall’s modernist pews installed in what is, in this particular instance, the Southbank Centre’s quite literal heart of darkness, to rekindle a reverence for one of modern-day rock music’s darkest artists.

The atmosphere feels positively electric long before Reznor et al. surface for a career retrospective that, if fairly reliant on his formidable 1999 tour de force The Fragile, picks and chooses sympathetically from a most estimable catalogue: a swampy, “kinda dangerous” Me, I’m Not – which has aged remarkably well since “back then” in 2007, it must be said – hits with incisive, monosyllabic precision, while The Good Soldier (again, off of Year Zero), for all of its try-hard (or hardly trying) lyrical tropes, flows with a languid effortlessness which lends a perhaps improbable essentiality to it. A third from the aforementioned full-length, The Great Destroyer, has decayed somewhat with time however, an unnecessarily elongated breakdown – all acerbic blurts and mangled, Trumpian outbursts – taking away from, rather than adding to, its otherwise caustic trill.

Elsewhere, the hits are shackled by a few misses: The Wretched, an aptly damned funk trudge in the best possible sense, casts a vast shadow in which Terrible Lie – alas, tenebrous and that bit too tinny this evening – can only quiver in comparative impotence, before a recharged March of the Pigs charges to the fore with the reckless abandon of an irate sounder of swine. Reznor, known for the odd onstage meltdown, duly obliges, smashing his mic from its stand and hurling his guitar toward a worried roadie already worked to the quick by the Pennsylvanian’s irked antics.

The calm after this stormy paroxysm comes in the comparably placid shape of the perfectly formed Something I Can Never Have: anything but “a fading fucking reminder of who [he] used to be,” it has not only stood the exacting test of time, but once all the numbers – zeros, ones; Zero Sum, etc. – have been diligently punched into the system, few would, or could be said to have better directed Reznor toward that sweetest of spots between metallic, coruscating rock, and tender, dramatic musicality. It stood out from the bitter, industrialised grit of Pretty Hate Machine, and does likewise tonight, characterised as it is by a steeled intensity.

It was, and will forever remain, the blueprint for The Fragile, and the show begins as said record does: with Somewhat Damaged, The Day the World Went Away, The Frail, and The Wretched all volleyed out with a vulgar disregard for the newly spawned Bad Witch. Before a brash, necessarily abrasive rendition of The Big Come Down a solid hour or so later on, Reznor candidly divulges how Nine Inch Nails has, perhaps most importantly (to he, at least), afforded him “a way to make sense of the world.” And Something I Can Never Have – so far ahead of the curve, conceived as it was an entire decade before he almost flatlined here in the capital in 2000 – allows us to, in turn, make sense of his. So although they play a self-professedly “self-indulgent setlist,” they’re indulging not only fans of The Fragile, but in so intimate a setting, so too aficionados of he himself, as we (don’t so much sit, as) stand eyeball to eyeball with a visibly rejuvenated Reznor.

And while little of Bad Witch gets a good airing, the rambunctious, Ilan Rubin-led God Break Down the Door provides a techno-nonsensical, characteristically areligious standout not only on the album, but tonight also. The preceding Ahead of Ourselves less so, but it’s all over in a blur of brutal rhythmic thump and pumping synth before it’s really gotten itself going, in any case.

But tonight isn’t solely about one ingenious pioneer, and his long-awaited return to London: for one, Smith’s invitation to partake in his Meltdown curation “started [Nine Inch Nails’] whole tour,” while for another, this evening marks Reznor’s first show in this city since David Bowie’s premature departure from it. That it takes place south of the river – if only marginally – makes his visceral revisiting of I’m Afraid of Americans all the more consummate a tribute to his onetime collaborator.

Thenceforth, highs come thicker and faster than speed ever could: I Do Not Want This is resiliently unsettling, even now, while Even Deeper delves into moments of unprecedentedly plunderphonic cacophony. If schlocky stadium-rock, there’s a tantalising grind to Less Than, while everyone within the Royal Festival Hall bellowing “fist-fuck” with carefree feeling makes Wish more than a mere one-off. A cantankerous revision of Gary Numan’s Metal – beset by reputed “technical difficulties” – eventually concludes with another mercifully ephemeral meltdown, Reznor’s keyboard demonically overturned before, recomposed, he turns in an obliterative take on Reptile.

It is nonetheless, and last but never least, Hurt which does the real damage here: enhanced rather than hindered by the confidential hum of Robin Finck’s electroacoustic, the song unequivocally solidifies Trent Reznor’s status as a singular, genuinely ingenious songwriter – much the same as the caliginous overlord of this year’s Meltdown – and ensures that, for what may be the first time today, there’s more warmth inside the Southbank Centre than outside of it.