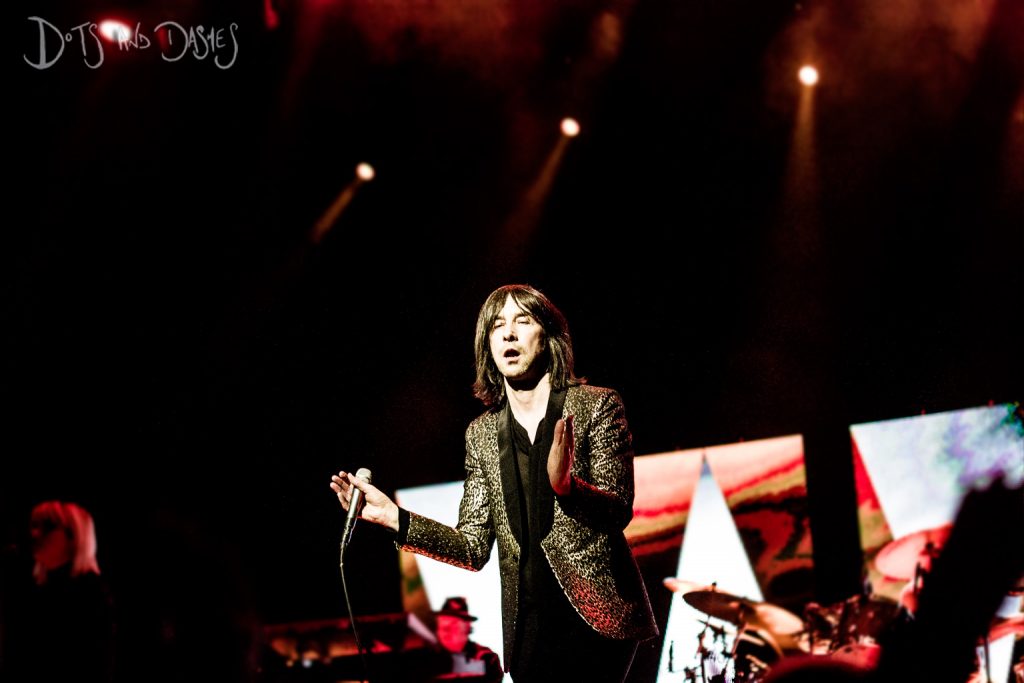 Bobby Gillespie, the great wreckhead better suited to guiding we lowly pilgrims through the Barrowlands, rather than the lavishly carpeted aisles of the London Palladium, has, as he will himself so candidly admit, never been to this “really beautiful venue” before this evening. However, it is – as per the print on each and every ticket guaranteeing entry tonight – ‘A Really Useful Theatre’, that’s apparently, commensurately accommodating to the likes of Where the Light Gets In, from last month’s somewhat patchy Chaosmosis, as it is Andrew Lloyd Webber’s schmaltzy mullock. Which is perhaps unsurprising, given the venue’s revival as a go-to grotto for soft-rock’s elder doyens, with Bryan Ferry, Roger Hodgson and Elvis Costello all set to take to the stage in the next few weeks alone…

But Gillespie is that bit more spry than said elders: he may turn fifty-four this summer, yet he remains both rakish and rake-like; the contoured subtleties of his attenuated torso very much visible through a thin gauze of slinky blackness that, as per their recent, Sky Ferreira-featuring single aforesaid, really does allow the light in, leaving relatively little to the imagination once he’s shed a scintillating, glittery blazer. You could thus suggest he’s spruced up for the occasion, but it’s one with which – initially likened, pretty inexplicably, to a “Royal Horse Show” – he’s not necessarily at ease: more commonly accustomed to playing for those sorted for E’s and wizz, rather than swiggers of extortionate fizz, the feeling that this isn’t quite Gillespie’s comfort zone lingers. (Indeed, during a suitably debauched Rocks, when accosted by a wide-eyed, decidedly spaced invader, he’s visibly taken aback by the kind of brash abandon that the likes of Kill All Hippies and Shoot Speed / Kill Light would once have inspired nightly.)

Tonight however, as Primal Scream step on into songs from “the second summer of love” and beyond, his melon is slowly yet surely untwisted, as his seemingly harsh mood unmistakably mellows; pugilistic gesturing gives way to gracious praise of an audience getting their rocks off, off the rocks, with the Palladium doing a roaring trade in Stella Artois, et cetera as well as champagne. The rip-roaring Movin’ On Up of course ensures the ‘civilised’ seating charade lasts all of four seconds, futile, snaggletoothed cries of “sit doon!” falling on ears instantaneously deafened by Andrew Innes’ steadfast Les Paul; also lifted from the every-way-ecstatic Screamadelica are Loaded – during which Gillespie gets busy à la Bez with a clutch of maracas – and a rendition of Come Together that, mercifully, proves all the more evocative of Terry Farley’s legendary alternative mix, instead of BT Sport’s infuriatingly repetitive Saturday afternoon idents. It ought to be said that, alas, these few Screamadelica cuts are found slightly lacking in the absence of the peerless Mary Pearce though, as no fewer than seven black-clad backing singers (who, admittedly, succeed in marginally lowering the average age of those in attendance) fail to match her frankly massive, and for that matter, massively vibrant delivery.

All the more bemusing, mind, is the cameo of Cat’s Eyes’ Rachel Zeffira: an unlikely foil for Gillespie’s effete theatrics, and one whose vocal often fails to cut through a quintessentially trebly mix, her agrestic locks flail in loose tandem with the peroxide shocks of a wan Hannah Marsden (of little-known London garage-rock ensemble, The Snides). That the pair of them feature – in patches, and primarily – on material lifted from the letdown that is/ was Chaosmosis doesn’t necessarily contribute positively to their respective causes either, although this isn’t strictly their fault: Golden Rope hangs from the exact same sort of rufous hook from which Kasabian’s threadbare recent singles have tended to dangle, all vacuous calls of “Hallelujah!” and bulky, hulking bass lines; the ensuing Trippin’ on Your Love proves a cerebral barf of putrid nostalgia, heaved up from Haçienda days long gone to everyone barring Peter bloody Hook; 100% or Nothing sounds, slightly perturbingly, like, well, New Order redoing Pet Shop Boys’ Integral. Which, all things considered, is considerably preferable to When the Blackout Meets the Fallout; a spiky blast of combative bombast, suggestive of Does It Offend You, Yeah?

Indeed it does, although it’s moments such as the amphetaminefield of strobe and polysyllabic blitz that is Swastika Eyes that xtrmnt such qualms with Primal Scream. Because, like it or lump it, Bobby Gillespie’s lot have very much become a heritage act, trading off of bygone heydays, but continuing to beguile today in doing so. We’re here to scream along to Screamadelica, therefore; not to mosh to their somewhat chaotic latter-day efforts, all of which loosely analogises Primal Scream to Messrs Ferry, Hodgson, Costello, and so on. But ultimately, for all of their abiding foibles and those barely abidable, lesser records they’ve foisted upon us in recent times, coming together to commemorate some of Britain’s greatest ever releases really does remain a love-in I’ll want in on forevermore.