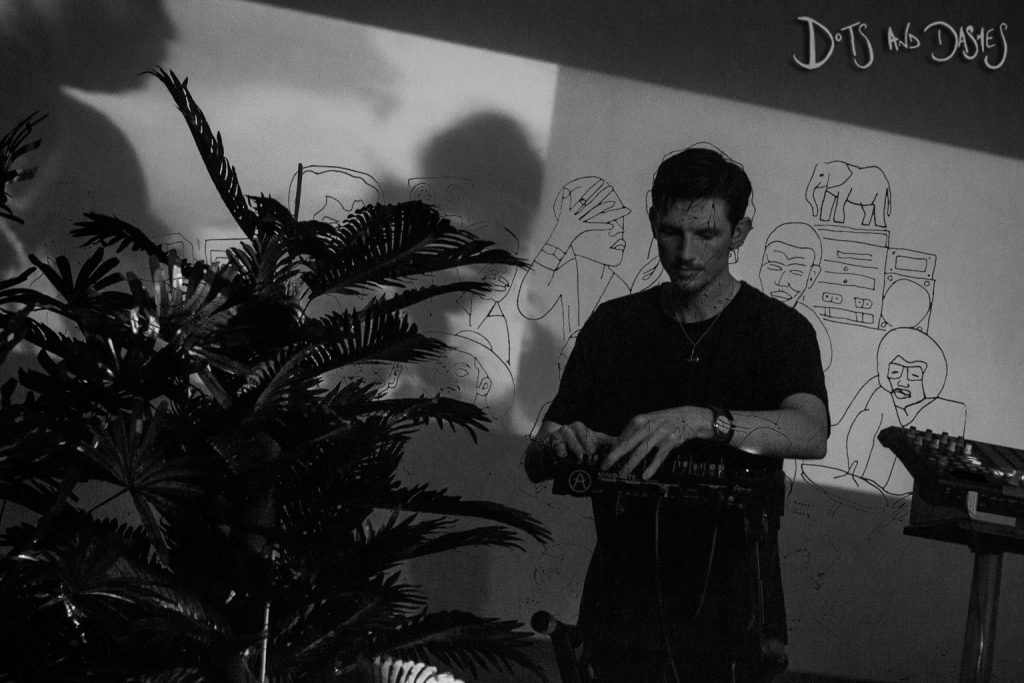 Whilst this might sound a compliment that is backhanded at best, bear with me when I begin this particular appraisal of Romare by admitting that his live show is still, to be totally honest, a little bit all over the place. That said, this is perhaps his intention: firstly, the creator of one of the year’s most striking, compelling recordings – namely début full-length endeavour, Projections – takes his moniker from the late American collagist Romare Bearden, who himself centred so much of his work around the African diaspora in his native ’States. At once, locality is seemingly rendered irrelevant therefore, much as it should be in nigh on, if not all walks of life; to my mind, at least. Secondly, having first come into contact with decks, and therefore a more readily ‘danceable’ approach to his musical career across la Manche, à Paris, this sense of geographical inconsequentiality seems to be something that Bearden’s namesake seemingly has a similar attitude toward when it comes to nationality, or the discernible lack of a need therefor within a contemporary reality. (That he studied African-American visual culture at university only serves to solidify this hypothesis, of course.)

Now, this is all well and good; great, in fact. And Projections is an irrefutably excellent reflection of the modern-day multiculturalism that Romare – né Archie Fairhurst – seems to observe, respect, and so on and so forth. It’s an album that blurs borders and boundaries, as well as so many genres, so that it should become a becoming smudge of vital vitality that perhaps has more in common with the brilliant acrylics of, say, Odili Donald Odita or Synthia SAINT JAMES, than it does the altogether less vibrant bricolages of Bearden, or, for that matter, the colourless line drawing to decorate Projections’ sleeve. As an expressive, exceptionally colourful record, the music itself completes the picture in question, lending depth, texture and, perhaps most pertinently, pigment to what then goes on to provide a truly holistic listening experience. However, this isn’t necessarily true of this evening…

First things first, let us mercilessly slaughter the elephant in the room: Fairhurst’s neglecting to air recent single, and album standout Rainbow – whether that be the Mr. Scruff-y, Havanan ‘Club’, ‘Bedroom’ or original edit – is a grave mistake; a reprehensible blot on his copybook. Additionally, when swamped by, or ensconced in dense, heavy, heavily conventional and incontrovertibly ‘Western’ beats, the intricacies and samples of Motherless Child and Nina’s Charm lose a not insignificant degree of their own. Thus in much the same way that the diptych live visuals behind him at times seem caught somewhere unsuccessful between New York and the welkin-scratching grotesqueness that is the city’s iconic skyline, and the Afro-American communities an innumerable number of storeys below, all too often, Fairhurst relies on all-too-British conservatism, rather than the impressionistic palette from which Projections was so impressively painted.

Better, then, are the squelchy, elastane bass lines of Roots, into which we sink like soles in thickening quicksand; the James Brown-sampling, gloriously bombastic Lover Man, with its brash brass and testosteronal swagger. Those more faithful reproductions, or perhaps replications such as these, better testify to Fairhurst’s indubitably nimble intermingling of disparate styles to create something that is rather substantial. (Of course, it goes without saying that they sound all the more so over the enviable Oval Space PA.) But a sense of nuance is, essentially, lacking this evening; and, with this having proved so integral to the general aural luminosities to Projections, this seems another drastic oversight on Fairhurst’s behalf. Granted, it goes without saying that there’s only so refined a spin he could have put on things in so uncompromisingly cavernous a space as this; that he performs solo, with nothing but an analog synthesiser, MPC sampler and laptop for company, is also a somewhat prohibitive configuration. (A more ‘live’ show has been mooted for the coming months and, consequent successes permitting, presumably years. But, for the time being, it’s not merely Rainbow that’s missing…)

It wouldn’t be too gratuitously forgiving to envisage Fairhurst subsequently finding his feet onstage, though – the songs are certainly already there, after all. Once these and their intrinsic qualities are afforded pride of place once more, Romare will surely go on to enthral more readily than he does this evening, therefore. And so it’s thus, seemingly, a case of his needing to reassess the self-evident strengths of Projections and redress the balance, or at least the contrast between unnecessary ‘Westernisation’ and necessarily exciting Afro-American samples and soundbites, accordingly. Then this will become the sort of inspiratory project I, for one, am so desperate for it to become; all that’s apparently needed is a slight refinement in focus, so that it should find a place, or space in which it truly belongs.