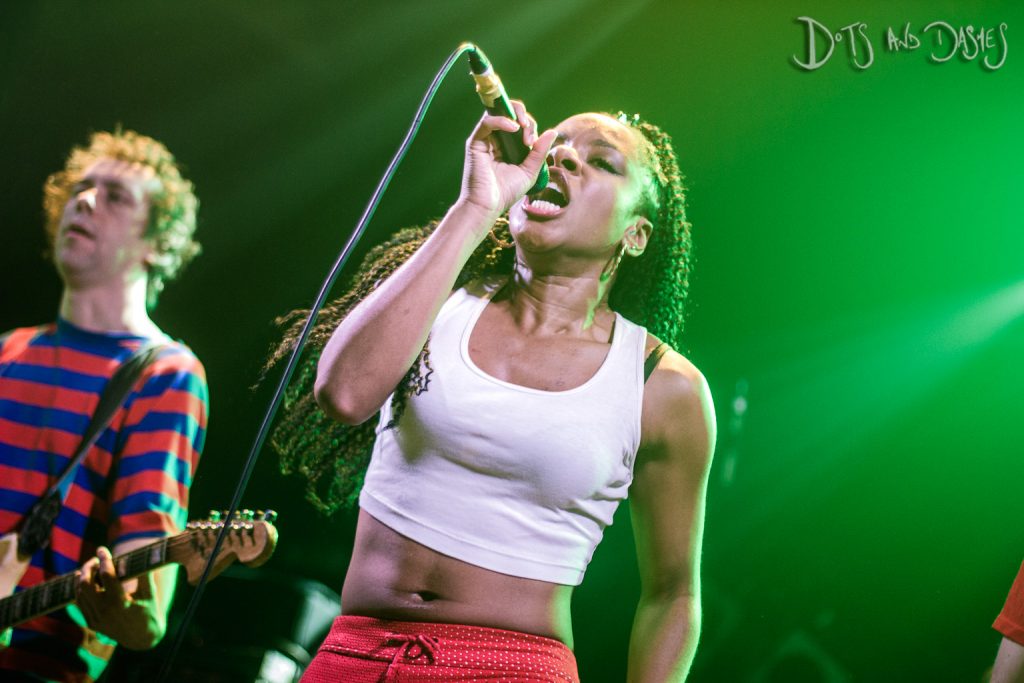 Quite how profoundly etched into the grooves of today’s widely lionised vinyl renaissance the resurgence of both The Avalanches two years ago and The Go! Team this may be, beyond useless surmise, I know not. Nonetheless, on the basis of the latter – led by the irrepressible Ian Parton – selling out the Electric Ballroom this evening, there certainly remains an as-yet-unquenched thirst for the warm hum which continues to emanate from the Brighton outfit. And while the seminal début album Thunder, Lightning, Strike pilfered from everyone from Quincy Jones to The Teardrop Explodes, heavily relying on crackly samples to piece together their cracking pièce de résistance thus far, as opposed to their antipodean counterparts, Parton et al. have always, admirably, looked to recreate as much as possible live in order to create as passable a live show as that of tonight.

There are moments when it’s little more than that: the opening Flashlight Fight is, stripped of Chuck D, reduced to a brash pastiche of hip, if not popping, backing track; Chain Link Fence, taken from last month’s SEMICIRCLE, may be simple as Do-Re-Mi, but is also about as funky as an entire rotisserie left to rot; the horns of Grip Like a Vice, meanwhile, sound tinnier than a crumpled Lilt can, and are more Golborne Road street party than Notting Hill Carnival. But minor gripes aside, there’s little, to no merit in being quite so down about so upbeat a band and, equal parts community outreach programme and outrageously glorious soul outfit – replete with two-part (and only infrequently two-bit) brass section, as many drum kits, and more vocal sass than you can shake four drumsticks at – such unapologetic proponents of pure joy should be celebrated rather than censured.

As should one of comparatively (and deplorably) few line ups which, in keeping with the Government Actuary’s Department’s Equal Opportunities Policy, is as inclusive as a SOAS prospectus, with as much cultural ground covered over the course of an hour or so as on any one of the School’s myriad courses. Background – whether that be ethnic, musical, or other – is of little significance, as The Scene Between combines Asiatic with cosmic tones, while stealing a little from Len’s sunny, one and only hit; the altogether more melancholic (and, incidentally, indispensable) Rolling Blackouts comes across with tousled, slightly Mancunian mangled jangle; two trebly recorders go a long way toward disentangling Get It Together from the rank brown weave of Sackboy, and painful flashbacks of endless hours wasted playing LittleBigPlanet.

Although that was then – or, somehow, ten years ago – and this is now. And as the juxtaposition of, say, Mayday and Ladyflash goes to show, relatively little has changed; which is nothing if not really, truly reassuring. To learn that The Go! Team’s oeuvre has proven to be as timeless as the songs – many of which are considerably older still, of course – from which so much of it was constructed is a source of genuine encouragement, while the fact that Ninja (née Nkechi Ka Egenamba) continues “to rock the microphone” is one of ongoing enjoyment.

A band of incredible (and perhaps improbable) longevity, then, the likes of Semicircle Song – during which Egenamba beseeches members of the front row screech names and star signs into the aforementioned mic – serve to suggest there’s still plenty yet to give. Likewise, with the hip-hoppy pomp of late ’80s NYC pumping through its arterial tubing, All the Way Live only reinforces such a feeling. But, for all Egenamba’s braying about how the band are now five records deep, with the vast majority of the set drawn from those which currently bookend their discography, they very evidently know where their strengths lie, and play to those accordingly.

Huddle Formation, for instance, sees the room split in two, with each side inclusively prescribed specific lyrics from its facile, if effective chorus to shout back at the other. In light of luminary Ryan Coogler’s marvellous latest blockbuster, stripping it of its Black Panther Party chant is to miss a trick somewhat, but on an evening when recreation trumps replication, a paucity of offstage trickery is as commendable as enduring standout, Everyone’s a V.I.P. to Someone. And while The Go! Team may not be the sort of ensemble that everybody’s talkin’ about nowadays, visibly, they remain Very Important to those who’ve thronged this particular venue this evening.