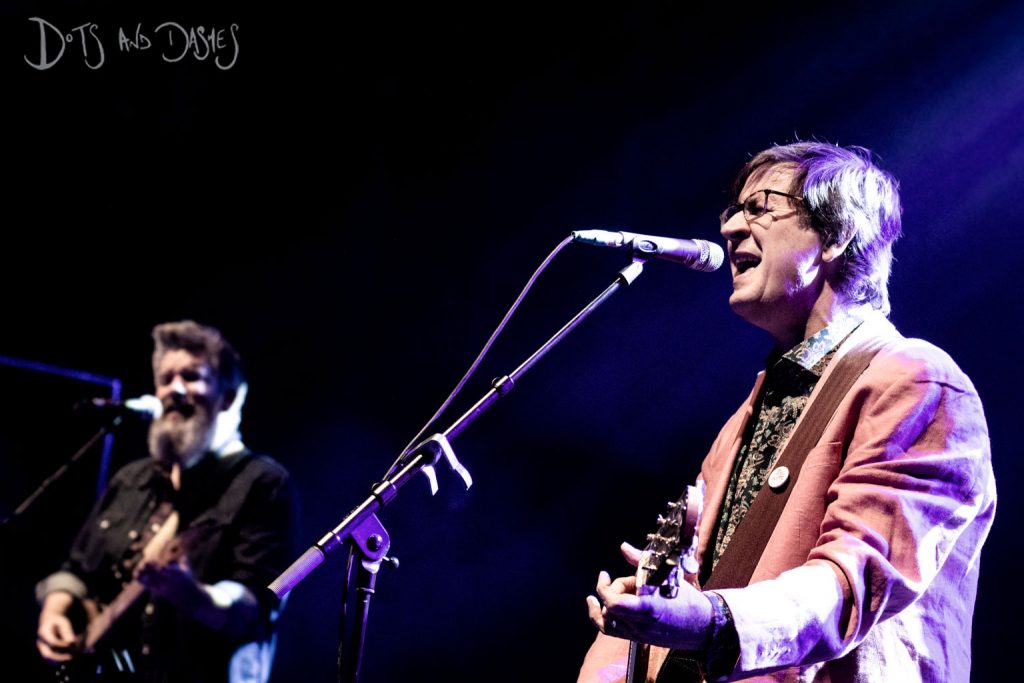 Levels of investment in this artist or that band can be that bit more readily qualified, I think, once you’ve seen them play the exact same venue more than once. And such is with John Darnielle’s the Mountain Goats, having previously witnessed a typically spellbinding performance inside the O2 Shepherd’s Bush Empire, in support of 2017 release Goths in the dank autumn of that same year. My levels of investment pale in comparison, and dramatically, to Darnielle’s fervid disciples lining the front row, though: theirs is a total devotion; an exhaustive command of an exhausting catalogue. And these loyal apostles – primarily, surprisingly, “restless young subordinates” – make the evening infinitely more special for all involved.

This is perhaps because, ultimately, Darnielle – accompanied for the most part by Matt Douglas, and Douglas only – is here in support of In League with Dragons. And his seventeenth full-length effort beneath the banner of ‘the Mountain Goats’, released last spring, really doesn’t feature too highly on my proverbial league table of personal favourite releases by the scholarly Californian. Mercifully therefore, it’s more touched upon than trawled through, and is improved upon in places: played with a “big smile on [his] face,” Younger proves luxurious, even when played as a two-piece; stripped of its country tassels and twang, Waylon Jennings Live! is reborn as upbeat hoedown fare, and assumes a new life of its own. It’s likely the only time a chorus itemising “firearms and flash drives,” as well as passports and “international money orders,” has ever been recited in the building; and it’s merrily belted down from every one of its three vertiginous levels. But it’s the faintly ludicrous, incongruously frisky Cadaver Sniffing Dog which, with expectations having been duly adjusted, fares best. (If ever a cartoon were set around the exploits of a “cadaver-sniffing dog,” and this were its theme tune, I would be watching said cartoon with the orthodox zeal of a post-school, square-eyed preadolescent.)

Elsewhere, as is so often his wont, tonight’s setlist is essentially a studied redaction of Darnielle’s ever-lengthening history, weighted in favour of more recent entries. The title track to Transcendental Youth, 2012, hears two intertwining sets of keys lend a welcome, more sombre mood, with the Gershwin-worthy instrumentation of its recorded counterpart “long gone.” Wear Black, from the aforementioned Goths, may be as hammy as Darnielle’s fleshy pink blazer but even now, reduced to a deadpan duet, it retains its soul in the absence of those soulful four-part harmonies. Chapters and verses from the quite rightly canonised The Life of the World to Come include the spiriting Hebrews 11:40 and a piercing, solo rendition of Matthew 25:21, while from more or less longest ago, No Children reeks of The Pogues in much the same way that Shane MacGowan would have done B&H Gold and Guinness at the top of the morn during his demeaning heydays. But with Christmas hurtling round the bend, the band just about get away with it. Largely unheralded masterpiece We Shall All Be Healed is, alas, neglected altogether.

You Or Your Memory, from the subsequent The Sunset Tree, brings with it a similar melancholy though, and it’s this 2005 release which is spotlit: given equal billing to In League with Dragons, Dance Music sees Darnielle tap his toes which, in the absence of more conventional rhythmic accompaniment, provides a percussive backdrop to his graphic, autobiographical recollections of an abusive stepfather. Up the Wolves meanwhile has as yet, and in spite of recent successes, still to catch on as a sing-song at Molineux, but sets the Empire alight tonight; it’s the closing This Year though – a wondrously rousing number, set in stark contrast to a truly woeful one – which steals it. A song of escapism, concerning living very much in the moment and paying little regard to eventual, inevitable consequence until its time comes, it’s one of a number to have yanked me back from a brink across the course of these past twelve months; a brink beyond which lies an uncertain, if certainly forbidding, grim unknown. This is something that Darnielle could doubtless better, more eloquently articulate, although the comparative simplicity of a song rooted in teen defiance and fortitude remains one of its very greatest strengths.

It leaves you grinning like a goon; like a famed meme pooch in not so much a “broken house” as a burning one. By this point, Darnielle and Douglas – joined by support act Laura Cortese & the Dance Cards on strings – are really ‘burning down the house,’ and everybody compulsively joins in with the killer chorus as though speaking in tongues. It makes for a magical, transcendent moment; the sort that has been experienced in 2019 all too infrequently. Indeed, it’s only in driving past the nearby Eventim Apollo, where boozed loons spilling out of Sleaford Mods busy themselves heckling blurs of ambulance, that the effect wears off. For those who’ve expended inestimable energy down in the front row, it may yet be in full effect…