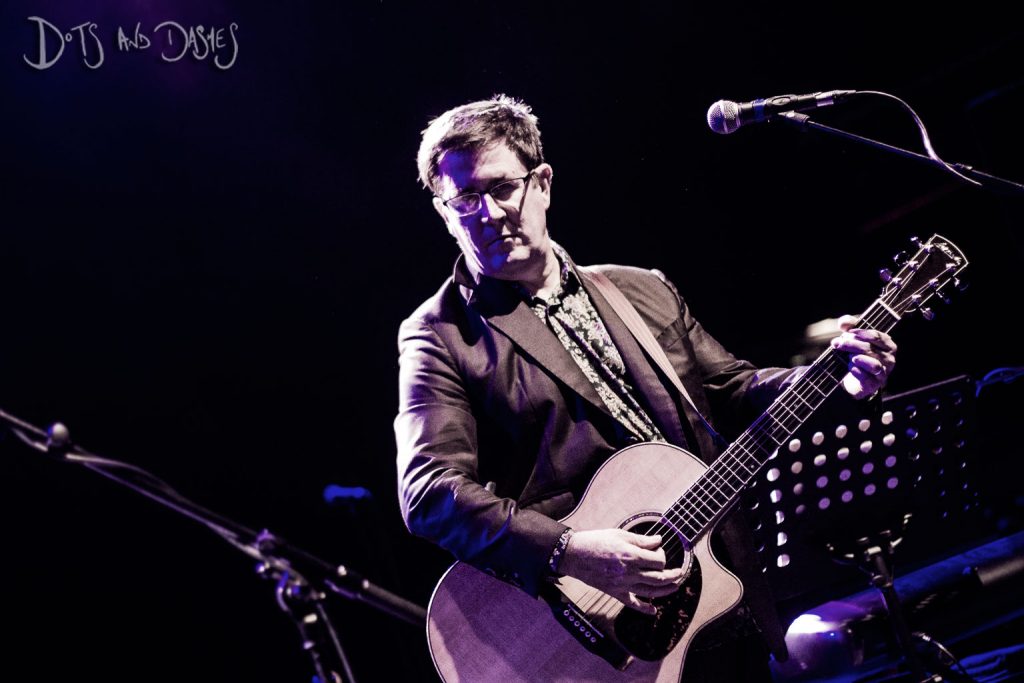 It’s great testament to both the influence and the intellect of John Darnielle that not only did the Mountain Goats main man publish his second novel, Universal Harvester, earlier on in the year, but as part of his I Only Listen to the Mountain Goats podcast series – transmissions commissioned in collaboration with Night Vale Presents – doubtlessly erudite discussions line up alongside cover versions of songs from All Hail West Texas, with the estimable likes of Andrew Bird, Craig Finn, Laura Jane Grace and Mothers, amongst others, contributing. But tonight, whilst still a celebration of Darnielle’s wry brilliance, is less about those he’s influenced from a musical perspective, and therefore all the more about those he’s proffered helping proverbial hands to along the way on a totally personal level.

There is, as goes without saying, something of a cultic allure to the Mountain Goats: the back catalogue is expansive – and thus expensive to complete on everybody’s preferred vinyl format – with the constituent songs ensconced deeply in complex vernacular and rich narrative verve. But the real appeal stems from Darnielle’s liminal positioning as a sort of outsider-done-good; a scholar who’s graduated from submissive to maverick status, with first-class honours, and entirely on his own terms.

The first sign of spiriting personal acceptance comes a mere three numbers in, Transcendental Youth song Until I Am Whole boasting the supremely reassuring chorus, “I think I’ll stay here ’til I feel whole again/ I don’t know when” – a precursor to the now-omnipresent mental health brouhaha that, although long overdue, at times seems more voguish than vital. Later, the perfectly spare Get Lonely hears Darnielle look to “find a crowd and blend in for a minute,” which is precisely the purpose his songs of sometime isolation – when not desolation – serve: they bind together the motley lot stood, enamoured and tremendously deferential, before him. Forget “a little”, for there is ample comfort within them; and this is, seemingly, universally acknowledged by all.

The knotty dichotomy between intimacy and isolation – or a lingering fear thereof – rears its confused features during a solo rendition of fellow Get Lonely song Woke Up New, Darnielle resolutely beginning: “On the morning when I woke up without you for the first time/ I felt free, and I felt lonely, and I felt scared,” before the choral, rhetorical, “What do I do without you?” is whispered back at him quite knowingly by many in attendance. But once again, as he gets himself “ready for the future to arrive,” hope springs anew. Thus although there may be a bleakness in, for instance, the ensuing Wild Sage – accompanied only by the tapping of his shoeless lower extremities on the stage underfoot – a tacit optimism is never far removed from proceedings…

Perhaps it’s his or, rather, his nameless characters’ readiness for the future, whatever it may bring; their lavish coping mechanisms – the consumption of “boiled peanuts for breakfast” on Alpha Omega; or questionable concoctions of Coca-Cola, vodka, coffee liqueur and cold milk on See America Right B-side, New Chevrolet in Flames; or wearing black, whatever the weather – which brings he and his audience closer together. It makes for a precious sort of unity, seldom experienced and explored cursorily in the closing moments of Steal Smoked Fish, as Darnielle hollers: “God bless us, all of us/ We who learn to shun the light.”

In keeping with vampiric comparison, and a faint infatuation for all things mortuary, the Smiths-referencing segment of Rain in Soho (“There’s a club where you’d like to go/ You could meet someone who’s lost like you/ Revel in the darkness like a pair of open graves/ Fumble through the fog for a season or two”) perfectly epitomises this particular coalition, or mutual understanding between artist and audience, and his awareness of this seemingly ramps up as the night’s climax approaches. Improbable singalongs then become increasingly commonplace, with a particularly apt This Year rapturously received, before several thousand – no longer as young as they once were – repeatedly bellow, “Hail Satan!” in beatific chorus during an atypically uproarious take on The Best Ever Death Metal Band in Denton.

And while there is a general acceptance of an inability to escape geographical circumstance (“Nobody ever gets away/ Even the best of us come back some day”, Andrew Eldritch Is Moving Back to Leeds; “Never get away, never get away/ I am never, ever gonna get away from this place”, Liza Forever Minnelli), personal circumstance seems all the more alterable to Darnielle. Tempered with hesitance, the Up the Wolves lyric: “There‘s gonna come a day when you feel better/ You‘ll rise up free and easy on that day/ And float from branch to branch/ Lighter than the air/ Just when that day is coming, who can say?” suggests as such, as does the “awesome,” pep-talking You Were Cool. “It’s good to be young, but let’s not kid ourselves/ It’s better to pass on through those years and come out the other side/ With our hearts still beating/ Having stared down demons/ Come back breathing,” goes this breathtakingly sanguine rendition, unity achieved through common knowledge accrued while coping with individual difficulty. And while Darnielle’s leading point is that of self-empowerment, there are also instances of vengeful flair (“I hope the people who did you wrong/ Have trouble sleeping at night”, You Were Cool, mirroring Harlem Roulette’s “the loneliest people in the whole wide world/ Are the ones you’re never going to see again”), further infatuating those who’ve suffered.

Although this isn’t so much a celebration, as much as a commemoration of suffering that, if not quite communal, shares much commonality; and through that commonality, Darnielle et al. can achieve a sense of redemption, or reclamation of self-worth. And that, in and of itself, is worth far more than the £28.40 printed on the ticket stub…