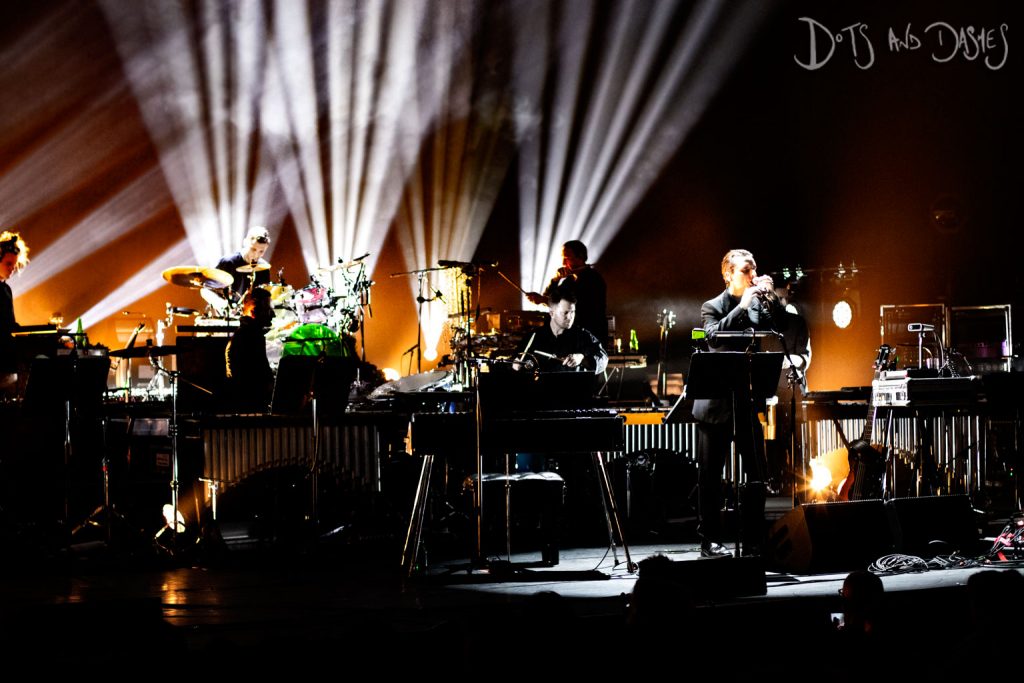 I have, personally, remarked on the extraordinariness of These New Puritans to such extent, that it may well have lost all meaning by this stage. Nevertheless, Messrs Barnett continue to surprise and astound on the regular, so I’ll do neither such thing and continue with the encomia apace. To contextualise exactly how exceptional a band they are though, their début album – Beat Pyramid – was released in early 2008, when onetime contemporaries would have included the decidedly unremarkable likes of The Chapman Family and Hatcham Social; Ipso Facto or XX Teens. While it was all too easy to lump Jack and George (and, then, Thomas Hein and Sophie Sleigh-Johnson) in with that largely forgotten lot, they somehow managed to escape time, space, and context to create music which set them apart both above and beyond.

They may well have been some way away from their creative apex, which they may be yet to summit, although there was something about that album: Colours was awash with the zeitgeisty fluorescence of freshly post-adolescents (Hadouken, Does It Offend You, Yeah?, and so on; in spite of their precocious creations, These New Puritans were themselves of this sort of age), yet it was simultaneously tinged with the frenetic twitches of Gang of Four; the skeletal, post-punky neuroses of MKK3 featured unforgettable lines concerning “the suburbs of Milton Keynes” and “Michael Barrymore masturbating”; and didja’ ever hear anything incisive as Elvis back then? Don’t think so. But it was the thunderous Swords of Truth which subsequently became something of a blueprint: the intense, terrifying pomp of sampled fanfare combines with drums bleeding abattoir brutality in much the same way they did for much of the rather more carefully orchestrated Hidden (2010). And it’s a compositional ploy deployed – albeit that bit more sparingly – on last year’s Inside the Rose also.

It’s this which has often elevated These New Puritans’ live performances – the stentorian whumps of George Barnett are as much a force of nature as the fiery imagery regularly ignited behind him – yet tonight, this is masterfully offset by sublime nuance and moments of striking intimacy. They may not be infinite in number, but several vibraphones make quite the sight within the ligneous confines of the Barbican Hall; better yet is the euphony they imbue Infinity Vibraphones with a mere few minutes in. A good few later on, a blinding combining Where the Trees Are on Fire with Six vitally evidences how singular a songwriter Jack has become. The antithesis of the quintessential frontman, he wears his responsibilities awkwardly, frequently turning his back to the stalls when not slowly motioning flight or gruesome crucifixion. But as he sits behind a Rhodes, and sings those solemn four words of Six, his artistry never seemed more stark nor true.

His voice has remained unchanged over the course of their expansive, varied catalogue – equal parts David Bowie, whose dulcet tones ricochet around the room before and after tonight, Dave Gahan, David Sylvian, and others given other given names – but will always find its place, as well as ample space in which to slither around. It does so in amongst the gaps vacated by austere keys, Astatke-esque clinks, and dusky brass reminiscent of West End Girls during the spasmodic Fragment Two; assumes a more sprightly, hip-hoppy lilt on the Einstürzende Neubauten-informed Fire-Power, which is further powered by manic guitar work courtesy of Bark Psychosis’ Graham Sutton; ensconces itself within the outwardly sinister on the Depeche Mode-indebted Beyond Black Suns. If These New Puritans’ work really works when beauty and brutality are perfectly counterpoised, then it’s Jack’s vocal – and the acute, cutting versatility thereof – which conducts, keeping composed equilibrium.

This isn’t their first time performing at the Barbican Hall, of course. Indeed, were any more reiterating their idiosyncratic credentials required, of their four records, only Beat Pyramid wasn’t showcased right here. But if tonight is billed as The Blue Door, through which there is the promise of ‘reinterpretations and rearrangements of tracks from across their four studio albums,’ then the framework which differentiates this from shows played in support of Inside the Rose, say, is somewhat nebulous at best. The scaffolding flanking the stage makes for a neat tie-in with the boiler-suited industry demonstrated by the numerous percussionists onstage, not least during an obliterative blitzing We Want War, while the visuals – including collaborations between George and the celebrated likes of Harley Weir and Daniel Askill – are engrossingly projected onto both this and the highly defined screen behind, but the concept is unclear. I must admit to further reservations, too: Into the Fire is overwhelmed with all-too-abrasive bass, while Infinity ytinifnI – a lone proverbial brick from Beat Pyramid – is simply interpolated with reprised bits and pieces of Infinity Vibraphones, rather than being revived in any more vibrant a manner.

But otherwise, from the opening arpeggi of A-R-P – a track which gloriously transmutes into something that might’ve once sprouted, prefabricated, from the mind of Paddy McAloon – right through to the a new one entitled I Don’t Want To, which nudges Duran Duran melodrama, their genius is exhibited brilliantly. As for their geneses, of course, it’s facile stuff to compare them with those I did when their work could have been more closely aligned with the likes of Foals (circa Antidotes – for all of the Oxonians’ incredible vogue, These New Puritans remain much the more credible band) and Late of the Pier. Even Mica Levi, then of Micachu & The Shapes, who’s since gone on to garner a formidable reputation in similarly left-of-centre circles. But to round this one up, tonight serves as a striking reminder of the duo’s abiding ingenuity, while leaving us with a beguiling glimpse into a comparably bright future. As for their relationship with the Barbican, it’s seemingly as synergic as that of this same establishment with Max Richter; The Clash and Hammersmith Palais; Four Tet and Brixton Academy. When they’ll at last be held in such high regard, however, I really do not know.