If space is indeed the place, as Sun Ra once projected, then bluedot definitely comes a close second. Because, far removed from the fear and loathing, and trials and tribulations besetting ‘the outside world’ today, there really is – as Karl Hyde remarks – a “cool vibe” in the shadow cast by the Lovell Telescope. The remarkable legacy of Sir Bernard Lovell – completed in 1957, but visibly active even now, as it slowly yet surely pivots and swivels throughout the course of the weekend – is totally integral to the successes of this inaugural go, tours around, and talks about it both central and essential. And while there are one or two glitches in the system (mainly the Orbit Stage – ostensibly beaming in ‘the sound of the near future’ – being far too small, and the queues for the far-from-commonplace Portaloos being rather too long), bluedot lifts off without even so much as a hitch.

It was Carl Sagan who is considered to have first coined the phrase, relating to this telluric rock, ‘Pale Blue Dot’. But it is another reflection from the US ‘astronomer, cosmologist, astrophysicist, astrobiologist, author, science populariser, and science communicator’ (thank you, Wikipedia) that seems all the more pertinent; within the context of the contemporary, at least: that ‘everyone you love, everyone you know, everyone you ever heard of, every human being who ever was […] lived […] on a mote of dust suspended in a sunbeam.’ A quote reproduced in the programme, it goes quite some way toward diminishing, or temporarily minimising the unremitting traumas of 2016. Because unless you’ve entirely illegitimate gripes with the ‘extensive and prolific’ use of illicit substances at a festival – not least one at which getting ‘spaced-out’ is more or less the main aim – that aforementioned ‘fear and loathing,’ and those aforesaid ‘trials and tribulations’ are, for all of a few days, suspended absolutely.

Returning to the programme a moment though, Professors Teresa Anderson and Tim O’Brien (Director and Associate Director of Jodrell Bank Observatory respectively) provide a cogent prologue, suggesting ‘to be human is to be curious. To try to understand the world around us, how it works and how we might improve it.’ As valuable a lesson as any to take home from 53.2363°N 2.3071°W, obviously, but at this ‘festival of discovery’ that is, and is very commendably, about ‘bringing Jodrell Bank to life’, we partake in a ‘celebration of human ingenuity’ – mediated, primarily, via the medium of live music – and this message resonates as loudly and clearly as radio waves rattling around parabolic antennae.

As for the music rattling around inner ears (and, in the singular instance of Steve Davis’ punitively loud DJ Thundermuscle set, intestines too), it’s a scrupulously curated mixture of rave revivalism and forward-thinking vanguardism. Firmly lodged in the former camp are Friday night headliners Underworld, whose show on the Lovell Stage is something of an excessively Setlist.fm-informed hack’s dream ticket, the title of Hyde and Rick Smith’s every song projected onto the screen beyond. 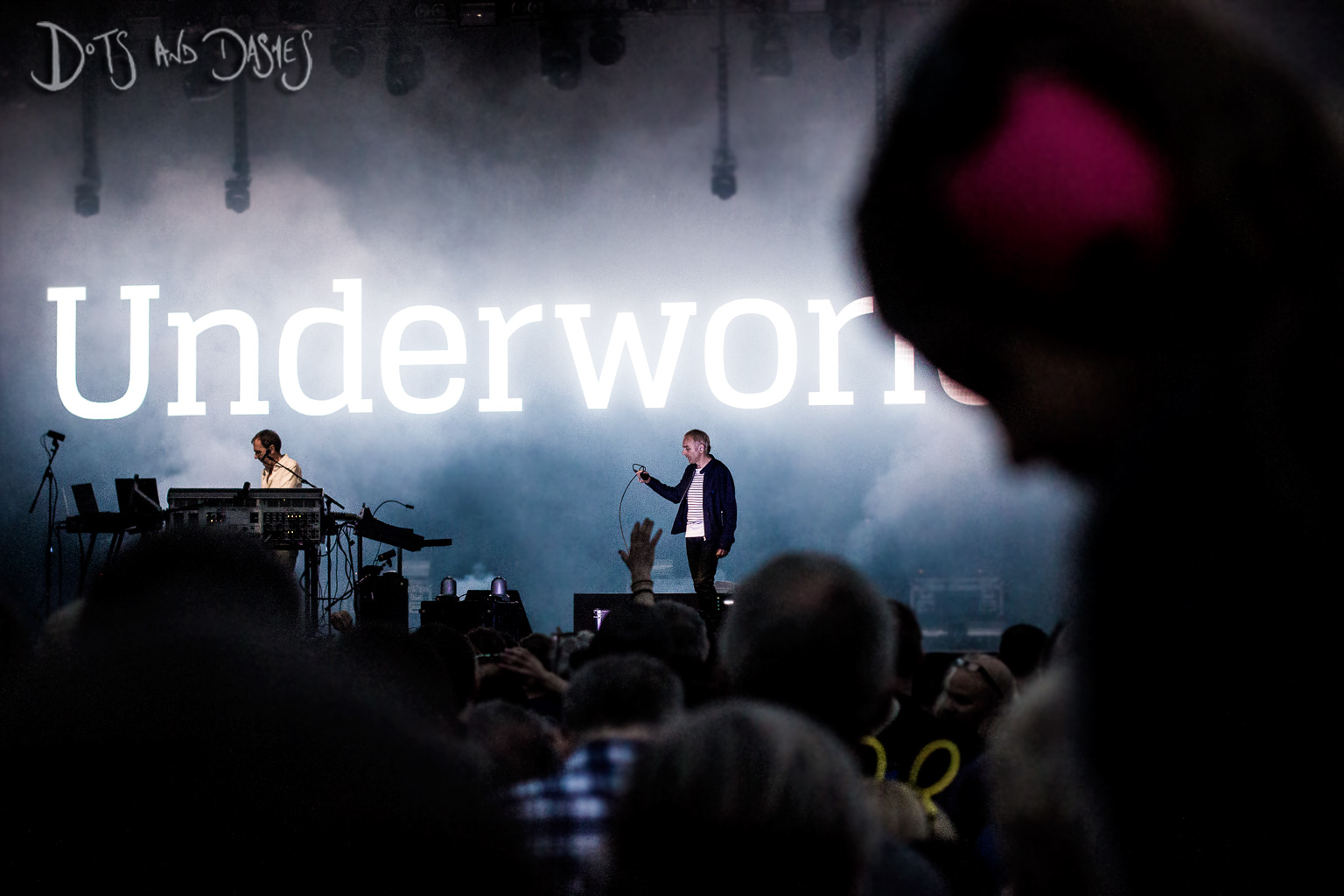 The opening I Exhale, exsufflated from their recent Barbara Barbara, We Face a Shining Future release, hears Karl “blah, blah/ Blah, blah, blah/ Blah/ Blah, blah, blah” about “a light, a glow/ Over the horizon” as the sun disintegrates into the farther distance, while a radiant Two Months Off proves reflective of Rick’s excellent soundtracking Danny Boyle’s London 2012 Opening Ceremony. Subsequently, Scribble joins the dots between D’n’B and proto-EDM, before a dubnobasswithmyheadman brace comprising both Rez and Cowgirl evokes visions of rave culture’s (probably) profusely perspiratory thawing out from a deep cryogenic freeze. And, heavy on material lifted from Barbara Barbara, We Face a Shining Future, Underworld look as though they’ve been given a new lease of life themselves, Hyde embodying the theatricality of abiding synth-pop doyen Neil Tennant all the while. And while there may be little musical commonality between the two, he and Rick have a similarly Jekyll-and-Hydian “vibe” to Tennant and Chris Lowe, the improbable symbiosis between writher and writer truly extraordinary. “A questionable hypothesis” perhaps, but with the likes of If Rah and Nylon Strung now in their arsenal, they’ve ample firepower on which to call upon once more.

Rather on the wane, meanwhile, is LA Priest, the reverence once reserved for Samuel Eastgate giving way to mid-afternoon reverie; something that Lanterns on the Lake likewise inspire. Whereas the former looks, but rarely sounds, like the biologically non-viable sprog of Connan Mockasin and Kevin Parker, the latter’s set alongside a select number of the Royal Northern Sinfonia is more a damp squib than the dazzling spectacle anticipated. As for precocious sibs Let’s Eat Grandma, their pat-a-caked half-hour on the Nebula Stage doesn’t so much beguile as bewilder, while DJ Shadow packs out the Orbit Stage, but doesn’t strictly practise all that he’s so keen to preach. “DJs are musicians,” he says, “and we can do a lot of shit. Some choose not to, and I don’t know why” he continues, before more or less pressing play on the Run The Jewels-featuring Nobody Speak, and doing little, to nothing else for the ensuing three minutes.

Thereon in, Saturday soir proves a real Francophile’s rêve, as enduring, durable Versailles duo Air invite us to revisit their seminal Moon Safari, before Jean-Michel Jarre’s breathless renditions of iconic Oxygène classics rejuvenate several thousand lulled into inattention by the entrancing ‘visual music’ composed by Brian Eno, and beamed onto the Lovell Telescope once darkness has duly descended. However, Jarre’s headlining stint isn’t simply about retrospection – something that, having not seen him since Mont Saint-Michel in ’93, at the relatively tender age of four, I suppose I was expecting – with vast swathes drawn from his lukewarmly received Electronica 1: The Time Machine of yesteryear, and the subsequent Electronica 2: The Heart of Noise of this.

But so overtly, if not overly collaborative were these releases, that Mark Beaumont’s hyperbolic programme notes (proclaiming Jean-Michel ‘Lord of the laser harp, firework warlock, [and] summoner of spectacle on a level untouched by any other artist in the history of music’) are rendered all the more ridiculous. Because aside from Exit, featuring Edward Snowden’s (screened) diatribe on the distribution of private particulars, the impact of his collaborators upon the songs themselves is minimised by their absence. So the aforementioned Tennant is reduced to a robotised drone (Brick England) while Vince Clarke’s prints may be all over Automatic, Pt. 1 but it could do with his fingers depressing keys here and there, here and now, with The Time Machine – recorded in cahoots with Boys Noize – the only number benefitting from the (again, intestine-agitating) ‘laser harp’. Essentially, it’s a good show, working its way from entrancing techno (Immortals) to trance itself (The Architect), via Game Boyish blips (Equinoxe, Pt. 4) and the Eurotrashy bloopery of Oxygene, Pt. 8; but neither is it necessarily great, nor ‘on a level untouched by any other artist in the history of music.’ 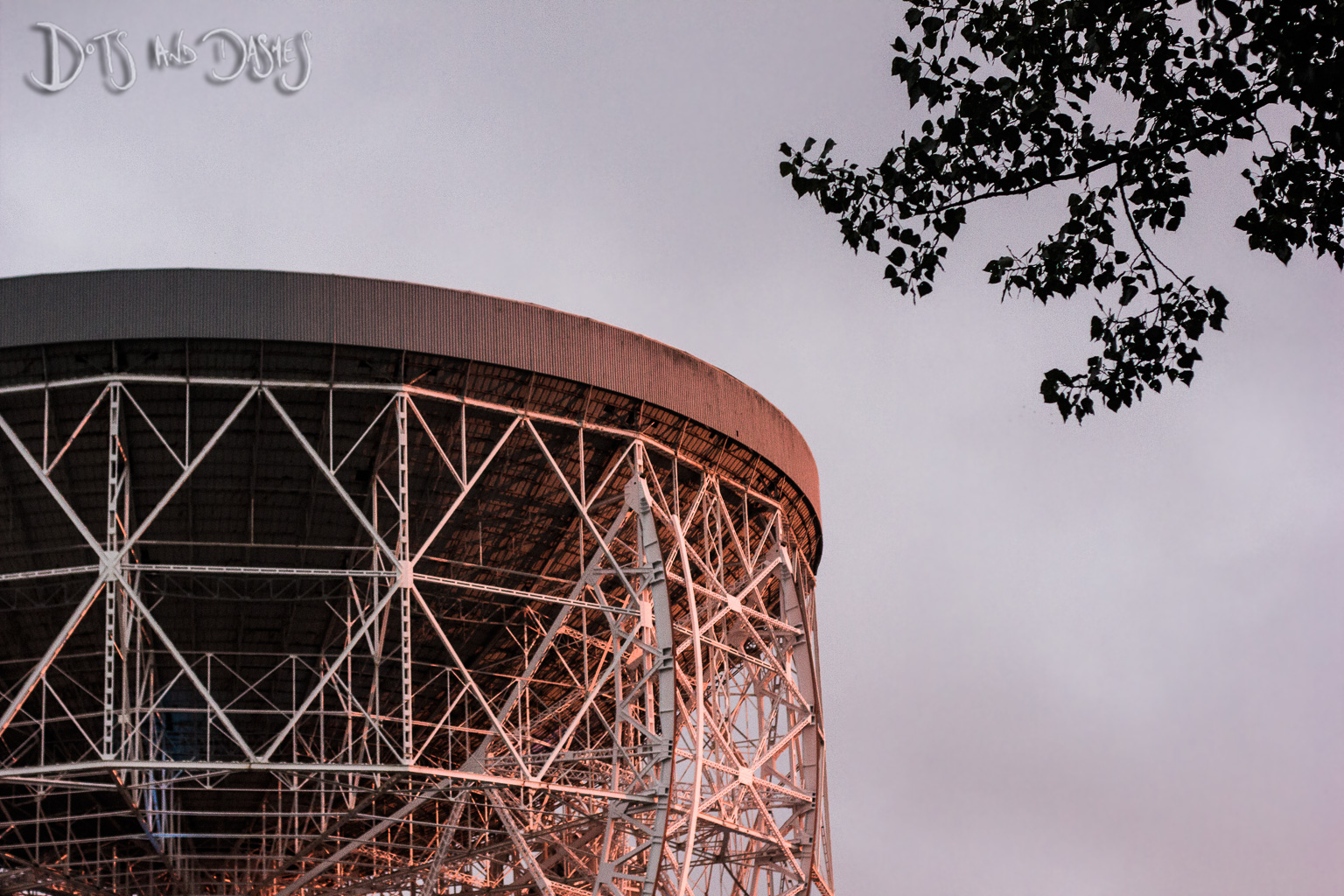 Ineffably fantastic, but not strictly by comparison, are NZCA Lines who, aside from a few missteps (Oh.. (Call Me Back) being one, and one constructed from samples picked up at the Southbank Centre, where they were probably better off; and Michael Lovett’s foot-on-monitor moment during Persephone Dreams another), enamour on the Lovell Stage. Emerging to the Francophonic euphony of Approach, a seductive, vaguely gravelly voice fittingly telling of “objets qu’on ne peut comprendre,” from a kinetic Chemical Is Obvious right through to a whopping Two Hearts, Lovett and Sarah Jones win over rather more than their fair share.

And while this may well have been something that was so drastically lacking from Caribou’s uncharacteristically non-committal performance at Citadel the preceding weekend, Dan Snaith et al. are right back on form come Sunday night, Brad Weber bashing through the likes of Can’t Do Without You and Sun with thoroughly reanimated mania. With Snaith himself having bashed out a 50-page thesis on ‘Overconvergent Siegel Modular Symbols’, it’s little wonder that the adopted Londoner does, genuinely, look elated to be here, but his is a set worthy of amassing masses far greater than that which greets many of the discernibly under-attended final day’s entertainers.

As for next year, well, specific dates have yet to be set, but it’s set to return by the sounds of things; then, as for headliners, the number of Autobahn T-shirts whizzing around the site ought to shed light on who’d top most attendees’ wish lists, ours included. And, given that bluedot already represents a shining light in an otherwise standardised, unwisely saturated field, there really ought to be no sign of any sort of glass ceiling limiting the newly emboldened ambitions of its organisers any time soon. So, bring on the men and their machines, I say…