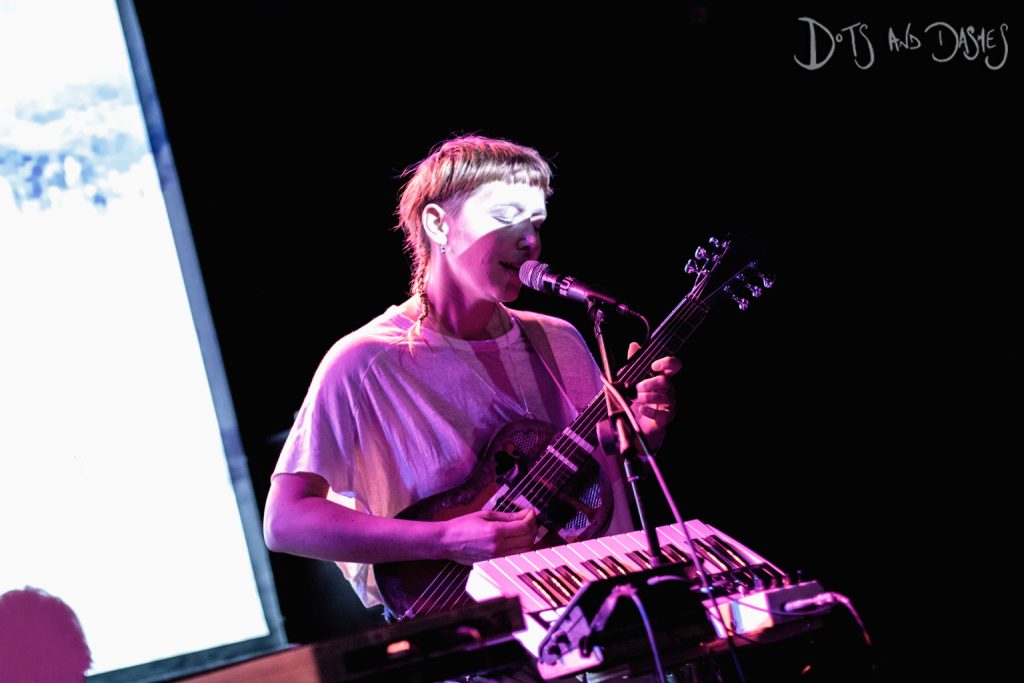 It’s been years since Buke and Gase headlined a London date, and more besides since they last did so at The Lexington. A new album – namely January’s Scholars – means new instruments and, while Arone Dyer and Aron Sanchez’ latest may be that bit more electronically composed than previous endeavours, the duo continue to bemuse and mesmerise in comparable measure. So much so that, following on from Your Face Left Before You (from their début, Riposte), they’ve no concrete response to an inquisitive heckler’s quizzing: “What type of music is this?”

Labelling Dyer and Sanchez’ highly athletic auricular workouts ‘avant-garde’ is, if fair, then selling them fairly short: their canon is of course singular, but it’s surprisingly exoteric all the same. Whether that be the euphoric, faintly magical Houdini Crush or the aptly onomatopoeic Hiccup – both of which come from previous release General Dome (2013) and are, perhaps improbably, greeted like smash hits cherished daily since – there’s as much cutting directness at play as there is an indisputable dynamism.

And the pair’s impressive versatility is never better evidenced than when they recite Derby and Eternity back-to-back: the former, fully loaded with killer synth lines and incongruously yearning lyrics (“Will you come back another way?/ I don’t get that kind of love anywhere else”), borders on chart-bothering, while the London-referencing latter – reminiscent of 4-track PJ, MBE – is way more experimental, if no less expressive for it. Likewise from their latest, an exhilarating title track chops and changes with the enlivening volatility of good HEALTH, while No Land – weighted deftly with the repeated, dystopian “no land, no food, no family” line – serves as another which proves they’ve been improving themselves since 2013.

It’s not solely musically, but so too shown in their onstage demeanour: they exude a newfound confidence – vocoded jokettes punctuate the set, while welcomed questions (other than the aforementioned) are candidly answered – which perfectly reflects the conviction of recent single Grips. “Too much grip cuts circulation/ And I’m numb from your needing,” Dyer confirms in defiantly liberated terms, she and Sanchez now contriving this kind of free, unfettered rapture with seemed ease.

This isn’t something that is, necessarily, entirely new for them – Seam Esteem wilfully refracts Jeff Buckley’s So Real through jagged, glassy fragments of acerbity, while both the ostensibly “sad” Hard Times and a wonderfully freewheeling Sleep Gets Your Ghost romp and stomp with carefree abandon – but this evening serves as decidedly conclusive proof that Buke and Gase now have the musical arsenal to be regarded, and indeed revered, as more than mere ‘avant-garde’ curios.