Having played host to such readily identifiable indie stalwarts as Arctic Monkeys, Oasis and Pulp, Finsbury Park (‘affectionately’ known to some by its backwards spelling of kraP yrubsniF) is no stranger to a wiry guitar line, nor lines of what the lattermost’s wiry frontman may refer to as “wizz.” But with Liam Gallagher having swaggered around this very stage a mere twenty-four hours prior to tonight’s headline performance from Queens of the Stone Age, those people looking to get all that out of – or, rather, into – their system have had ample opportunity to do so already, leaving those looking for something that bit heavier to have a go. And while Josh Homme & Co. quite incontrovertibly lack the hits of those stalwarts aforesaid, that’s not to suggest they’re incapable of hitting an approximated 45,000 punters with the nauseatingly forceful heft of, for instance, Sick, Sick, Sick.

Before then, and perhaps compensating somewhat for a perceived dearth of so-called ‘singles’, a pretty impressive supporting cast assembles. In places, nepotism prevails, as Homme’s wife and onetime Distiller Brody Dalle plays what she deems a ‘Stripped Down’ set on the imaginatively named ‘Second Stage’: drawing exclusively from her début solo album Diploid Love – a record that transpired to prove more tepid than intrepid back in 2014, and hasn’t aged particularly well since – it’s still heck-for-leather stuff, Savages’ aptly trenchant rhythm section lending both grit and guile to Don’t Mess With Me. Having visibly mellowed, however, Dalle no longer represents the naturally cyclonic, no-messing force she once did.

Which, in spite of Jaime Meline’s deferential feeling they’ve got precious little to offer today, is not something that can be said of the “good ol’ Brooklyn and Atlanta savagery” proffered by Run The Jewels. Meline – professionally, better known as El-P – and Killer Mike thunder through an 11-song set with the urgency of any good ol’ high-stakes heist, the likes of Legend Has It and Stay Gold brimming with 24-carat bars and met with apposite rapture. In absentia, Zack De La Rocha’s backing-tracked raps on Close Your Eyes (And Count to Fuck) hark back to Rage Against the Machine’s 2010 victory lap in this same vicinity, while the lumbering slump of Down ensures the duo end up on a real high; a blockbusting afternoon slot to show they’ve a whole load still to give.

By contrast, Iggy Pop – who may well have given us such immutably brash, brilliant records as Raw Power and The Idiot, and singles iconic as his Hutt-like torso – immediately delights, but ultimately disappoints as his set (perhaps aptly) sags after much early vigour. At seventy-one, his irrepressible pogoing through an opening salvo comprising I Wanna Be Your Dog, Gimme Danger, The Passenger and Lust for Life is, said in no uncertain terms, very impressive; his entirely neglecting his latest full-length effort – namely the Homme-produced Post Pop Depression of 2016 – is considerably less so, not least when the likes of the unapologetically Henry Mancini-aping Skull Ring and the grinding, inglorious Repo Man have made the proverbial grade. Still, it remains both a pleasure and a privilege to witness Pop strut his coriaceous stuff in the flesh, before an uproarious rendition of The Jean Genie sees him bow out with a reverent homage to his former accomplice, Bowie.

There would then, normally, be more than enough time to make it to the bar and back before Queens of the Stone Age take to the stage but, such is the at best questionable organisation of the event, that this never really looks all that likely to happen. Thus heels are dug and places staked for the night’s headliners. Singin’ in the Rain precedes their arrival – a meteorological reminder of just how long it’s been since even a slight precipitation soaked these shores – before they emerge to the incongruous, yet still ominous strains of Wendy Carlos’ Theme Music from A Clockwork Orange. From thereon in, “the punishment element” kicks in, a ruinous hat-trick consisting of Do It Again, The Lost Art of Keeping a Secret, and Go With The Flow whipping those with “not a dook of an idea how to comport [themselves] public-wise” into the sort of frenzy not witnessed since Reading Festival circa 2005. 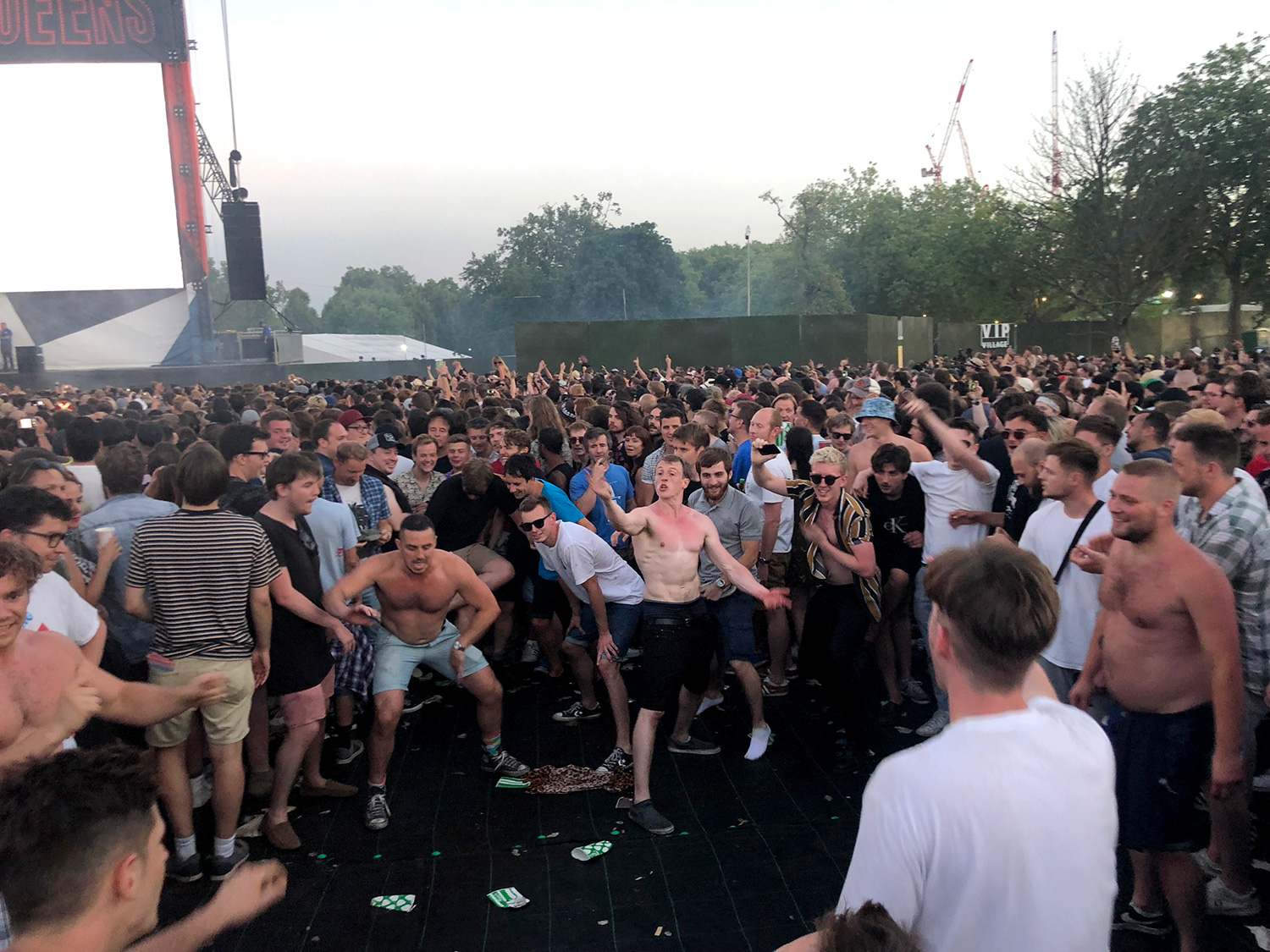 Pints – overpriced and paid for all the more in time – fly while inflated condoms float skywards, as circle pits swirl with the menace so intrinsic to records such as Rated R and Songs For The Deaf. Yet herein lies the issue with Queens of the Stone Age in this day and age: that their languid latter-day material lacks the once-integral malevolence of yore, meaning that they now find themselves occupying some noncommittal kind of nether region between their wretched, rabid bygone glories, and the pseudo-cerebral introspection of, say, …Like Clockwork. And the outcome is a) last year’s excessively slick, Ronson-and-Rankin-produced Villains, and b) mercifully, precious little being played from it.

From it, as much out of obligation as inclination perhaps, they play the bumptious, sludgy Feet Don’t Fail Me; the Norman Greenbaum-mimicking The Way You Used to Do; The Evil Has Landed, and Domesticated Animals. Although The Evil hasn’t so much landed, as lifted up, up, off and away; which is a real shame, for when they give us some more of this – as is with You Think I Ain’t Worth A Dollar, But I Feel Like A Millionaire, or a cataclysmic encore composed of Song For The Deaf and Song For The Dead – they’re more formidable than anyone seen before or, in all likelihood, after this summer, in London or far further afield. (Quite why these particular fields aren’t graced with the Feel Good Hit of the Summer, though, I will never know.)

There are moments – ephemeral, few, and far between though they may be – when they successfully manage to straddle the spectrum and strike an if not happy, then gratifying medium: from the middle, rather than middling end, of their discography, Little Sister, Burn The Witch and, most explicitly, Make It Wit Chu harness a latent rage, thrusting this sympathetically into a more risqué sound to spawn a more accessible, but never MOR aesthetic. And they’re probably better received than anything this side of No One Knows, on the basis of being known by everyone in attendance as some of their greatest hits. Thus although there are rather too many misses – both on behalf of Festival Republic and the headliners themselves – the day just about does enough to vindicate its inclusion on Finsbury Park’s hallowed Wikipedia page.