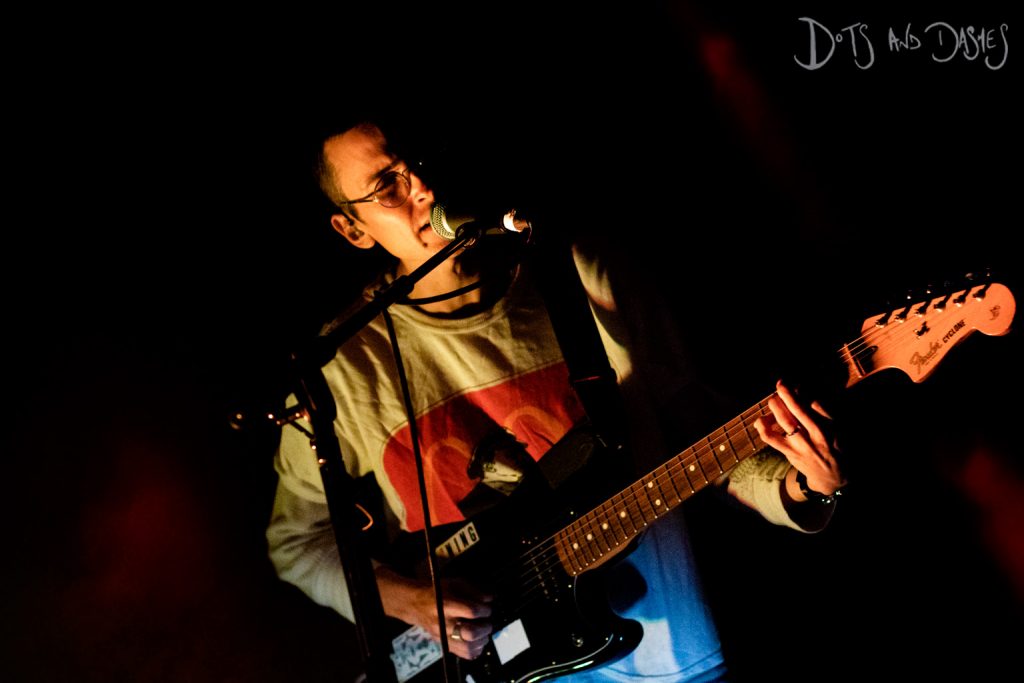 Whereas Zachary Cole Smith (ringleader, DIIV) once resembled Link, had Zelda’s central protagonist grown up in Bed-Stuy instead of Hyrule, a more composed, diligent air now surrounds him. He stands onstage at the Forum, in trademarkedly long sleeves, for a first London date – their biggest to date by a distance – in well over three years. It’s a city they once played, albeit in intense spates, very regularly; although less so of late.

A lot has changed, of course: now sober and spoused (as Smith will later reveal, he spent his honeymoon picking up pairs of Campers here), a tempestuous past seems firmly behind his temperate present as he, the ever-ready Andrew Bailey, and newer recruits Colin Caulfield and Ben Newman plough forth with renewed direction and rejuvenated vigour.

This maturity is evidenced as much in the music collected on Deceiver – a critically acclaimed third full-length, released last autumn – as Smith’s equanimous demeanour, as he both looks and sounds considerably older. (Stated complimentarily, as goes without saying.) And with their shoegaze elders in exile (Kevin Shields & Co.) or stuck on an interminable loop of ‘Music On Vinyl’ revisionism (Slowdive), there’s something of a void to fill with this fuller sound of theirs.

Having previously emulated a certain Cobain to perturbing, or perhaps an even dangerous extent, Smith’s inspiration is seemingly now being taken from more reserved, if no less respected, artists: the Sub Poppy Horsehead, which opens proceedings this evening, plays on the languorous solemnities of Codeine; the latent hope lurking within the analgesic Like Before You Were Born may well have been midwifed by pedalboards underfoot, but it has its sights firmly set on Air Formation overhead, as Smith tells of feeling like “an old man”. Lit by Loveless hues – cerise, fuchsia, magenta, and so on – the geneses of the muzzy For the Guilty are fairly self-evident, while lighter takes on Between Tides and Lorelei cast darker shadows.

However, in much the same way that Smith now looks and sounds a different person, at times, DIIV sound like two different bands. Or, rather, Smith et al. paint from two separate palettes, which don’t always work so well once mixed together. If Deceiver – with its dour Rhys Lee sleeve – lacked a little cohesion, its contrasts at times that bit too contrasting, then once material lifted from beyond is mingled, the extremities between darkness and light become too extreme. Oshin (Subsume), in the shadow of Taker (which, rather ironically, plays off certain stoner-metal tropes, and comes across slightly akin to Dopesmoker coming off the THC in a cold, discombobulated sweat), sounds insubstantial and dispensable; likewise, Take Your Time – taken from comparatively tie-dyed sophomore effort, Is the Is Are – flounders in the wake left behind Lorelei’s slowcore crush. On occasion, it’s as jarring as the juxtaposition of, for instance, True Widow and Whipping Boy on a wilfully obscure Spotify playlist, played back at the chalet of whoever during whichever ATP.

This is self-confessed dogmatism, though – DIIV are now a damn formidable band, and they’re on compelling form this evening. Skin Game, with its conquering riffs, evidences how cohesive a collective they’ve become, having come back from the brink, with the intricate guitar-based interplay between Smith and Bailey tightly entwined, as dual vocals of differing pitch (featuring Caulfield, and clearer than I’ve ever heard) of course recall those of Shields and Bilinda Butcher. But it’s Smith’s excellently supportive: “I can see you’ve had some struggles lately” lyric which, delivered lone, makes his a most empathic voice amidst the incessant noise. To suggest it’s that bit more relatable than, say, Dua Lipa’s “I don’t wanna live another life/ ’Cause this one’s pretty nice” sounds like folly, but kudos is due for sticking it so adhesively to song all the same.

To have this, Doused, Blankenship (Doused, Pt. II, to all intents and purposes), a heaving Acheron and so on, delivered by a band with drive and newfound focus, overshadows those aforesaid gripes, essentially. And while there are nods – some subtle; others less so – to the likes of Jesu, Loop, Neurosis, Seam and Slint, as well as slow dives on a tremolo arm reminiscing on My Bloody Valentine on the regular, DIIV really don’t sound directly relatable to any one of their direct contemporaries. Thus, in essence, the spark has well and truly been rekindled.